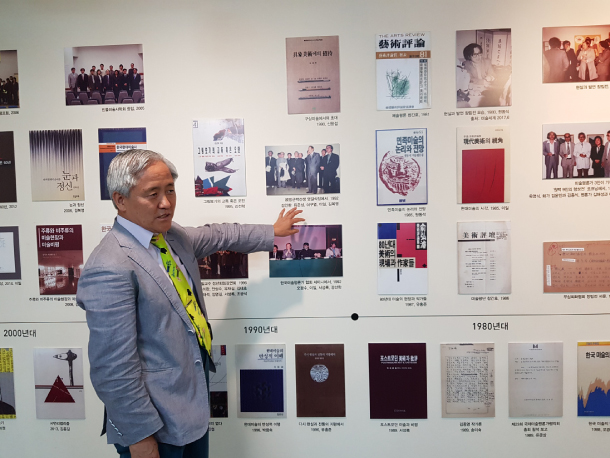 Kim Dal-jin, director of the KimDaljin Museum of Art Archives explains the works of major art critics of Korea at a preview of the exhibition titled “The History of Korean Art Criticism” at the museum, located in central Seoul. [MOON SO-YOUNG]

Art critics, as well as artists, curators, art historians and art dealers make up the art world and have all contributed to its history. But now there are concerns that art critics are losing ground, with the gap between critics and art lovers in the general population widening.

These conditions make it meaningful that a rare exhibition shedding light on the history of art criticism in Korea has recently opened its doors.

The exhibition entitled “The History of Korean Art Criticism” runs at the KimDaljin Museum of Art Archives, located in Hongji-dong, central Seoul, until Nov. 11.

The show features editions of journals and magazines with writings from 15 famous Korean art critics from earlier generations.

Photos of these critics at historical Korean events are also on display.

The exhibits also include new writings for this show by 36 currently active art critics. The writings cover topics like what art critics do, the problems they face and more.

The exhibition is held to celebrate the 10th anniversary of the KimDaljin Museum, a rare Korean private institution that houses a vast number of documents and research materials related to fine art.

“Art critics have special roles; they are neither scholars who only study in the ivory tower nor columnists for the general public,” said Kim Dal-jin, director and founder of the museum. “They should be a bridge that links artists and the public and should always be on the spot - the spots of creation of avant-garde art and spots of communications.”

“But they are now losing ground; in the past, many critics curated exhibitions, but now curators make exhibitions and even write the introductions and critical essays for the exhibitions,” he continued. “The first problem is there are only a few media outlets that run the writings of art critics. And the second problem is that the critics use too much jargon, making the general public feel excluded.”

Kim added that state-funded institutions should support art critics, while the critics themselves need to make efforts to solve the problem of their disconnect with the public.

The exhibit also includes news clips about major debates and controversies in the art world, such as criticism and defense by critics of abstract artist Kim Whanki (1913-1974) in 1977 and the split in the association of Korean art critics in 1987.

Meanwhile, the KimDaljin Museum polled 37 art critics and asked them who is Korea’s most representative modern and contemporary artist.