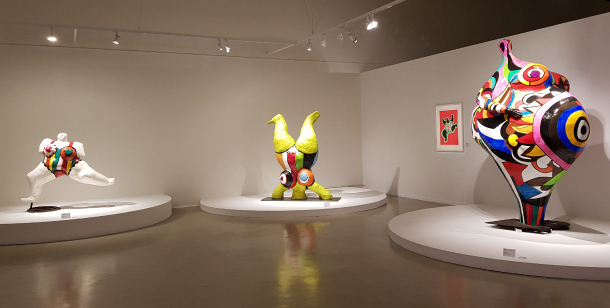 Niki de Saint Phalle’s iconic “Nana” series is now on view at the Hangaram Art Museum at Seoul Arts Center in southern Seoul as part of her large-scale retrospective, which runs until Sept. 25. Each of the exhibits is from Japan’s Masuda collection, founded by Yoko Masuda - a big fan and patron of de Saint Phalle. [MOON SO-YOUNG]

The 127 pieces now on view encompass de Saint Phalle’s sculptures, paintings, illustrated letters and furniture designs. They are all from Japan’s Masuda Collection founded by Yoko Masuda, a big fan and patron of de Saint Phalle.

The exhibition, titled “Niki de Saint Phalle: works from the Masuda collection,” helps viewers reconstruct de Saint Phalle’s dramatic life with her works arranged in chronological order. At the same time, it shows the friendship of the female artist and the female patron.

The exhibition starts with one of de Saint Phalle’s “Shooting Paintings” from the early 1960s, which brought her to fame. The work was created by using a rifle to shoot at a plaster relief with containers of paints buried underneath it, making the relief “bleed” when the containers burst. 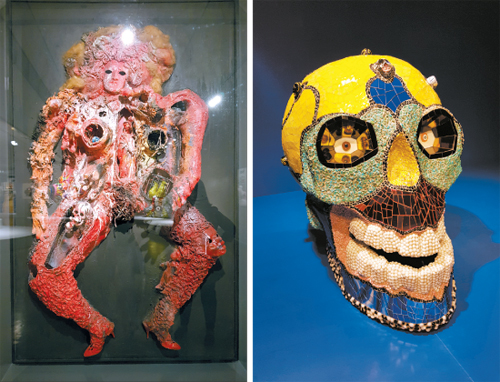 The museum explains that the piece is an attempt to overturn the stereotype of male attackers and female victims, as it was a woman, the artist, who shot the gun.

Many say de Saint Phalle’s “Shooting Painting” reflects her anger towards her father and the world of fixed gender roles. She suffered years of sexual abuse at the hands of her father, and went through an early marriage and unprepared childbirth.

The exhibition then leads to “Red Witch”(1962-3) which is a piece created between the “Shooting Paintings” and “Nana” series. The grotesque piece of assemblage depicts a woman within whom there are many contradicting images such as the Virgin Mary and a demon, symbolizing the multiple faces of womankind.

After that, the visually-pleasant and light-hearted sculptures of the iconic “Nana” series appear. The half-abstract colorful sculptures depict plump women in dance or acrobatic positions.

“She was inspired by her friend’s pregnancy,” said Mei Sohn, curator at the Visual Arts Department of the Seoul Arts Center.

Beginning with the “Nana” series, de Saint Phalle’s style did not change much in later years. She focused on monumental sculptures but also applied the light-hearted bold colors and curved lines to her paintings and illustrated letters.

Many of the illustrated letters on display are those sent to Swiss kinetic artist Jean Tinguely, who was de Saint Phalle’s second husband and artistic comrade throughout her life. 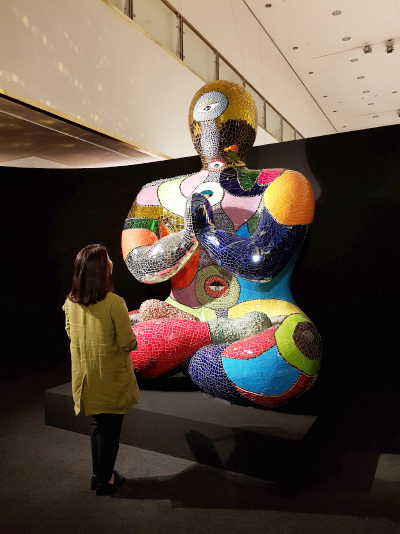 A visitor looks at Niki de Saint Phalle’s “Buddha” (1999) which she created after a visit to Japan at the invitation of Yoko Masuda. [MOON SO-YOUNG]

“Although they separated and reunited frequently and had disagreements and affairs with others, they continued to collaborate on various projects including the famous Stravinsky Fountain next to the Centre Pompidou, in Paris,” Sohn explained.

The illustrated letters on view also include those sent to Yoko Masuda, who was fascinated by works by de Saint Phalle on view in Tokyo in 1980 and began to collect her works. The two met in Paris in 1981. Although it took time until de Saint Phalle opened her mind to Masuda, they finally became friends and exchanged more than 500 letters, according to the museum.

The gigantic sculpture “Buddha”(1999) is one of the results of their friendship. De Saint Phalle created it after she visited Japan for the first time in 1998 at the invitation of Masuda and was inspired by a Buddha statue in Kyoto. She made it for the Niki Museum that Masuda opened in 1994 in Nasu, Japan, to show her collection of de Saint Phalle’s works to the public. “Buddha” is covered with fragments of ceramics, glass and pebbles.

“It has a similar style with the sculptures that de Saint Phalle created for her ambitious Tarot Garden in Tuscany, Italy, which is full of gigantic sculptures she created based on the figures appearing in the esoteric tarot cards,” Sohn said. “She was inspired by Spanish architect Antoni Gaudi, in particular his Park Guell in Barcelona.”

The exhibition finishes with her models for the Tarot Garden, which she started to build in 1979 and opened to the public in 1998. “Her philosophy is summarized in this garden,” Sohn said.