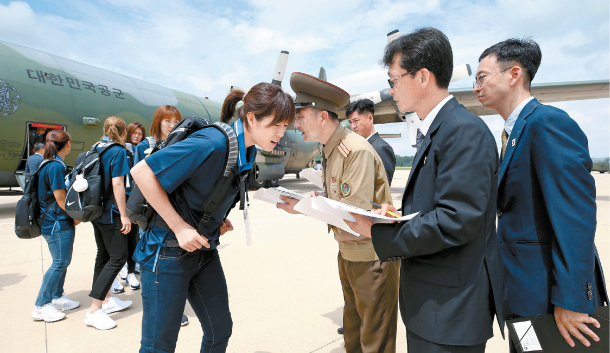 A North Korean official checks the identities of South Korean basketball players after they land at the Pyongyang International Airport on Tuesday. A delegation of 101 South Koreans traveled to Pyongyang for friendly basketball games with the North. [YONHAP]

A delegation of South Korean basketball players, government officials and journalists arrived in Pyongyang Tuesday for friendly basketball games with North Korea in the latest show of sports diplomacy between the two countries.

Some 101 South Koreans led by Cho Myoung-gyon, minister of unification, who oversees relations with the North, took two South Korean Air Force cargo planes from Seoul Air Base in Seongnam, Gyeonggi, south of Seoul, at 10 a.m. and landed at Pyongyang International Airport 70 minutes later, using an air route over the Yellow Sea. The athletes are mostly from South Korea’s men’s and women’s national basketball teams.

The two Koreas will swap players for two mixed competitions today and face off against each other in two friendly games tomorrow at the Ryugyong Jong Ju Yong Gymnasium in Pyongyang, the North’s capital. The South Korean delegation will stay at the Koryo Hotel.

The idea to hold a friendly basketball game this year was initially floated by North Korean leader Kim Jong-un, an avid fan of the sport, during his first summit with South Korean President Moon Jae-in on April 27.

It is unknown whether Kim will actually attend any of the games this week. A high-level official at the Unification Ministry said Tuesday that “nothing was fixed yet.” When South Korean musicians traveled to North Korea to hold a concert in Pyongyang on March 31, Kim made a surprise appearance and sat beside South Korea’s Culture Minister Do Jong-hwan to watch the show.

With U.S. Secretary of State Mike Pompeo expected to visit Pyongyang for three days from Thursday, it is also possible that he may meet with Unification Minister Cho, though local authorities refused to confirm any planned interactions between South Korea and the United States in North Korea.

The South’s delegation traveled to Pyongyang on two Air Force cargo planes, marking the first time since the 1950-53 Korean War that an aircraft currently in use by the South Korean Air Force flew to the North. South Korean delegations usually travel to the North on chartered or government-owned planes.

A high-level official from the Unification Ministry said on the condition of anonymity Tuesday that the government initially thought about sending the delegation by a civilian aircraft, but eventually switched plans due to procedural difficulties in finding one on time.

Seoul was also worried about American sanctions on the North because the United States bans any vessel or aircraft that has visited North Korea from landing in the United States for 180 days, said the official.

A working-level meeting between the two Koreas on forestry cooperation is scheduled to be held today in the truce village of Panmunjom. As both countries prepare for a reunion of families separated by the Korean War from Aug. 20 to 26, the Unification Ministry said that officials from Seoul and Pyongyang exchanged Tuesday the lists of candidates hoping to participate.