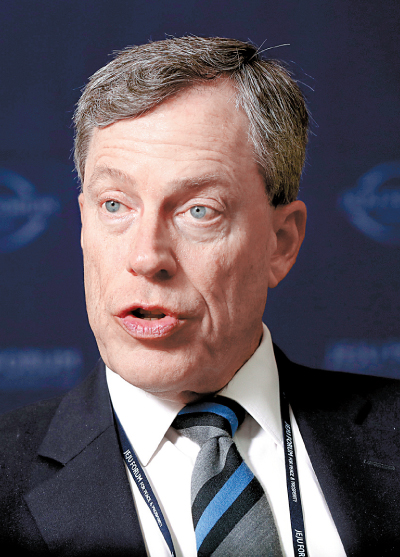 Philip Zelikow, a former U.S. State Department official and professor of history at the University of Virginia, speaks with the JoongAng Ilbo and Korea JoongAng Daily during the Jeju Forum for Peace and Prosperity on June 27. [KIM KYOUNG-ROK]

Focusing on denuclearization won’t get us anywhere with North Korea, says Philip Zelikow, a former U.S. State Department official and professor of history at the University of Virginia.

“I’ve been arguing for a long time that we need a different strategy,” he told the JoongAng Ilbo and Korea JoongAng Daily in an interview during the Jeju Forum for Peace and Prosperity on June 27. “Instead of pushing for denuclearization first - a narrow technical agenda that doesn’t even engage the Korean people very much - we should have a broad discussion on many issues that Koreans understand and are important, and then an improved atmosphere will make denuclearization easier.”

Whether or not the agenda includes denuclearization, the two Koreas should talk to each other first before other regional powers are involved, said Zelikow, who worked in the White House on German reunification during the George H.W. Bush administration.

“The most important issue now is for the two Koreas to clarify their relations with each other and to have a broad discussion of all the issues that concern them on several tracks,” he said, “with no preconditions. What that means is that I put South Korea in the foreground and believe they should be at the center of further negotiations with the North Koreans, with the United States stepping back a bit.”

A member of Barack Obama’s Intelligence Advisory Board, Zelikow said President Donald Trump might not have needed to go as far as meeting with North Korean leader Kim Jong-un after he had promised to halt tests of nuclear weapons and missiles.

During the three-day forum in Jeju, Zelikow was a panelist in the session “Creating a Peace Regime in Korea: Dialogue between the United States and Republic of Korea” along with Moon Chung-in, the South Korean president’s special adviser for unification, diplomacy and national security, and Ning Fukui, the Chinese Foreign Ministry’s deputy special representative for Korean affairs.

Below are edited excerpts from the interview with Zelikow.

Q. What is your assessment of the U.S.-North summit?

A. Let’s step back from the summit for a moment and understand what just happened. We had a very serious crisis last year. The crisis was the result of North Korea’s decision to continue a program of nuclear missile tests, which foreseeably created a serious danger of war and caused very tough economic sanctions.

Do you think the U.S. government had to agree to suspend military exercises?

What might be the next step in relations with the North?

I don’t think any of the major governments have clarified yet what the next steps will be. But I’ll make the point that I actually think a peace process - and negotiations about a peace process - is actually a really good next step, in addition to whatever discussions people wish to have about denuclearization.

Because I think the most important issue now is for the two Koreas to clarify their relations with each other and to have a broad discussion of all the issues that concern them on several tracks - on political, economic and security issues - with no preconditions. Because it’s only in the context of a broad movement in Korean relations that some of these other difficult issues like nuclear weapons will ever be fully signed. Also what that means is that I put South Korea in the foreground and believe they should be at the center of further negotiations with the North Koreans, with the United States stepping back a bit.

I think of this more as a two-plus-two process, in which the two Koreas work through some of the issues about their relations with each other, to create the environment in which China and the United States can then join in supporting the new peace regime on the peninsula. And as this unfolds, we can see how things go with sanctions. But the full denuclearization of the Korean Peninsula is a process that will take a number of years and great expense.

U.S. Secretary of State Mike Pompeo said recently that he was not going to put a timeline on the North’s denuclearization process, contradicting a previous statement earlier in June that he hoped to see “major disarmament” in “two and half years” or by the end of President Trump’s first term. What is your take on Pompeo’s recent statement?

I’ve been working on these issues off and on for 25 years. The old approaches on denuclearization have always failed. You see they always have a step-by-step process. What happens then is the steps always fail because the North Koreans end up selling you things that they don’t need in exchange for things that they don’t want and neither side is happy because you never end up settling the problem. Because you’re not really talking about the reasons they have the nuclear weapons to begin with. So we’ve tried these step-by-step bargains before again and again and again, and they’ve always failed and poisoned the relations even further.

I’ve been arguing for a long time that we need a different strategy. Instead of pushing for denuclearization first - that’s a narrow technical agenda that doesn’t even engage the Korean people very much - we should have a broad discussion on many issues that Koreans understand and are important, and then an improved atmosphere will make denuclearization easier.

Denuclearization is going to require hundreds or thousands people going into North Korea, possibly millions of dollars, financial assistance and other cooperation. This is just inconceivable unless broader relations on the peninsula are changed. That is why I thought Pompeo’s statement put it about right.

What is your evaluation on South Korean President Moon Jae-in’s role so far?

His policies over the last six months have been determined, energetic and successful. As an American, it’s not appropriate for me to comment on South Korean politics, but I can simply say that the South Korean government has driven a lot of diplomatic actions on all fronts during the last six months. Their policies in this phase have been successful. They’ve averted the immediate danger of war and lowered tensions.

How sincere do you think North Korea is about its pledge to denuclearize?

I don’t know. No one knows. I don’t think they [the North Koreans] know yet. It will depend on future conditions. I don’t think it will happen soon. They’ve expanded enormous efforts for 25 years to build up this program. They’re not going to throw it away overnight. I think they’ll wait to see how their security situation evolves, how their relationship with other countries evolve and then start making hard decisions. They might want a new kind of security and economic relationship with the United States. But I think that again starts with what kind of security and economic relations they want with South Korea.

Some say China was the biggest winner from the recent summits.

I think China was trying very hard to be sure that there’d be no war, so their policies have also been successful. The deal that I described, which settled the current crisis - including the freeze on major military exercises - includes the terms that China was advocating for last year. And that’s what they got, so I think they’ve been working with the North Korean side.

You were involved with diplomacy surrounding German reunification during the end of the Cold War as a National Security Council staffer under President Bush. Do you have any advice on the unification of the Korean Peninsula?

But there are a lot of different precedents that are interesting from the German experience. One of them that I learned from diplomacy is to let the Germans take the lead in working out their issues with each other. That’s what I’m advocating carefully, too, for the Koreans.