Park will look for third victory at Thornberry

Park will look for third victory at Thornberry

Park Sung-hyun, winner of the KPMG Women’s PGA Championship on Sunday, will compete for her third victory of the season at the Thornberry Creek LPGA Classic in Oneida, Wisconsin today, playing the first two rounds with Ariya Jutanugarn of Thailand and Angel Yin of the United States. 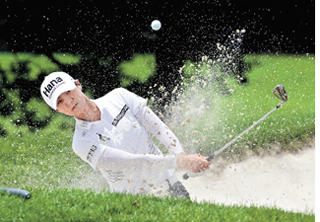 More than the three’s long hits, the matchup between Park and Jutanugarn also has fans excited, as they are the winners of this year’s major tournaments - the KPMG Women’s PGA Championship and the U.S. Women’s Open.

Park defeated Ryu So-yeon and Nasa Hataoka of Japan to win her second major title, the KPMG Women’s PGA Championship, on Sunday. Jutanugarn defeated Kim Hyo-joo in the fourth playoff to win the U.S. Women’s Open, which is also her second LPGA Tour major title. With the win, Park became the first Korean golfer this season to win a major tournament.

Since Park In-bee, the current No.1, and Ryu So-yeon, the world No. 4, are not competing this weekend, a win by either Park or Jutanugarn will allow them to steal the top spot. The win on Sunday allowed Park Sung-hyun to move up to second in the world raking, only 0.54 points behind Park In-bee. Last season, Park Sung-hyun briefly took the No. 1 spot in the Rolex World Ranking in November, becoming the first rookie to do so since the ranking system was introduced in 2006.

Since so many players have been unable to repeat their success in their second season on the Tour, a lot of fans were worried the jinx might also affect Park. She is proving them wrong, already winning two tournaments this season, including a major.

Chun In-gee, who won the LPGA Tour’s 2016 rookie of the year award, is no stranger to the second year jinx. Chun didn’t get a single win last season and her drought has continued so far this year. Chun will play her first two rounds along with Lee Mi-rim and Ayako Uehara of Japan at 8:14 a.m., starting on the 10th hole.

Defending Champion Katherine Kirk of Australia will play the first two rounds with Lydia Ko of New Zealand and Moriya Jutanugarn of Thailand at 8:47 a.m., starting on the 10th hole.

The first round of the Thornberry Creek LPGA Classic will be broadcast on JTBC Golf on Friday morning.