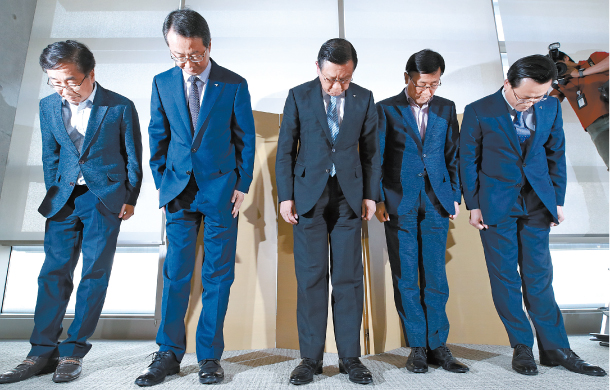 Kumho Asiana Group executives including Chairman Park Sam-koo, center, apologize for the recent in-flight meal fiasco at a press briefing Wednesday. On Sunday, 36 Asiana flights from Incheon departed without in-flight meals, ultimately leading to the apparent suicide of the CEO of a subcontractor to Asiana’s meal service supplier on Monday. [YONHAP]

Park’s comments came during a hastily arranged press conference Wednesday to apologize for the recent no-meal debacle that ultimately led to the apparent suicide of the CEO of a subcontractor.

“I feel deeply responsible for the incident,” Park said. “The problem was unexpected and changing our in-flight meal supplier was purely because the new supplier offered better contract terms.”

The so-called no-meal fiasco broke on Sunday when Asiana Airlines was left without enough food to serve on its flights after changing suppliers this month. It ended a contract with LSG Sky Chefs, which it has been partnering with for 15 years, on June 30 and was expected to receive meals from Gate Gourmet, a joint venture with Chinese HNA Group.

However, after a fire broke out on the construction site of the new joint venture’s factory, Asiana ended up inking a three-month temporary contract with Sharp DO & CO, a much smaller airline caterer used to preparing only 3,000 in-flight meals a day.

The caterer and its subcontractors failed to provide enough meals for roughly 26,000 passengers Asiana carries every day on international flights from Incheon.

Although Park apologized for the situation and expressed his sorrow at the apparent suicide of the 56-year-old CEO of a subcontractor of Sharp DO & CO, he described the incident as “unexpected” and rebutted speculation that the change in supplier was because LSG Sky Chefs rejected a request from Kumho to invest 160 billion won in the group.

“We inked a contract with LSG in 2003 when we were suffering from the financial crisis that led Korea to receive aid from the International Monetary Fund,” Park said. “The contract was unfavorable for us and Gate Gourmet offered a much better contract term.”

Park added that the change has nothing to do with the 160 billion won and that he also considered long-term business opportunities that he could create with the Chinese group.

“LSG Sky Chefs also did not reveal the production costs of the meals despite our requests, which also led to a fall out in negotiations,” Park said.

The group said the no-meal crisis will be solved this week.

As of 6 p.m. Wednesday, Asiana said there were no delays longer than an hour on any of its 79 international flights at Incheon, although 16 flights did leave without meals and eight more are expected to fly with hungry passengers by the end of the day.

On Sunday, 51 of 80 international Asiana flights departing from Incheon were delayed, with 36 ultimately leaving without in-flight meals. There were continued delays and meal shortages through Tuesday.

“Our predictions were wrong and we will normalize our operations by this week and also for the upcoming high-season when we need about 30,000 meals a day,” added Kim Soo-cheon, CEO of Asiana Airlines who was also present at the briefing.

Korea’s second-largest airline is currently compensating passengers who did not receive in-flight meals with airline vouchers worth between $30 and $50 that can be used to purchase duty-free goods or additional services. This causes its own problems, as Asiana employees are struggling to deal with the sudden spike in duty-free sales on board airplanes, as well as customer complaints.

According to industry sources Wednesday, Asiana Airlines employees are set to stage a rally against Park in Gwanghwamun, central Seoul, on Friday. They created an open KakaoTalk chatroom with more than 1,000 members, mimicking a similar chatroom used by Korean Air employees to discuss power abuse by the airline’s owner family.

The recent appointment of Park’s daughter Park Sae-jin as an executive at Kumho Resort has only added fuel to the fire of Asiana customers and employees as the younger Park has little experience relevant to the role.

During the Wednesday briefing Chairman Park said, “Society has changed to embrace female staff in management roles and I thought it was time my 40-year-old daughter experienced society.”

In an unrelated incident, HNA Group Co-Chairman Wang Jian died after falling from a cliff in France Tuesday. The death is reportedly not being viewed as suspicious.