It’s ‘Peace’ vs. ‘Prosperity’ in Pyongyang

It’s ‘Peace’ vs. ‘Prosperity’ in Pyongyang 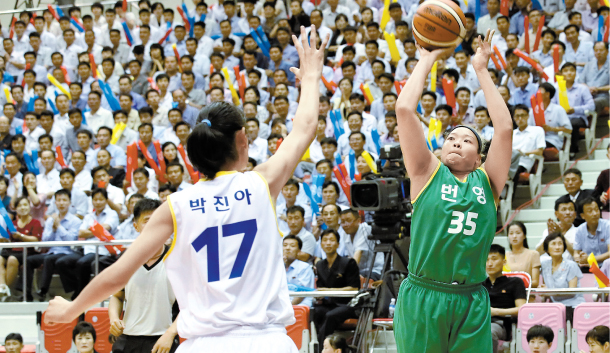 An athlete from South Korea, right, and North Korea, left, play a friendly game in Pyongyang Wednesday. The countries will follow up with more basketball diplomacy in Seoul this fall. [JOINT PRESS CORPS]

South and North Korean basketball players took to the court Wednesday in Pyongyang for their first friendly game in 15 years, surrounded by thousands of North Koreans chanting “peace” and “prosperity.”

A delegation of South Korean basketball players, government officials and journalists arrived in Pyongyang Tuesday for friendly basketball games with North Korea in the latest round of sports diplomacy between the two countries.

The two Koreas swapped players for two mixed competitions Wednesday, one each for men and women, at the Ryugyong Jong Ju Yong Gymnasium in Pyongyang, the North’s capital. The teams were named either “Peace” or “Prosperity.” According to pool reports, the 12,000-seat gym was fully packed, though who the audience members were was not immediately known.

North Korean leader Kim Jong-un did not show up as of press time. Officials from the North Korean leadership who observed the games from the main podium included Choe Hwi, vice chairman of the Workers’ Party’s Central Committee, who chairs the State Physical Culture and Sports Guidance Commission; Ri Son-gwon, chairman of the Committee for the Peaceful Reunification of the Country of the DPRK, a cabinet-level agency overlooking relations with the South; Kim Il-guk, chairman of the DPRK Olympic Committee; and Jon Kwang-ho, the DPRK vice premier. DPRK are the initials for the North’s official name, the Democratic People’s Republic of Korea.

Officials from Seoul who sat at the podium were Unification Minister Cho Myoung-gyon; Roh Tae-kang, second vice minister of culture, sports and tourism; Bang Yeul, head of the Korean Basketball Association; and a general director-level official from the Prime Ministers’ Office.

When South Korean musicians traveled to the North earlier this year to hold two concerts in Pyongyang, Kim Jong-un made a surprise appearance at the first show on March 31 and sat beside South Korea’s Culture Minister Do Jong-hwan.

In a welcoming speech before the games Wednesday, Kim Il-guk, chairman of the DPRK Olympic Committee, said the competition was the result of both countries’ leaders’ “high will to tear down the wall of separation and advance independent reunification,” as well as the peoples’ “heated” passion to come together as one.

Today, the countries will compete against each other in two friendly games at the same venue. Pyongyang officials did not say whether Kim Jong-un will show up, according to pool reports.

Some 101 South Koreans led by Unification Minister Cho, who oversees relations with the North, took two South Korean Air Force cargo planes from Seoul Air Base in Seongnam, Gyeonggi, south of Seoul, on Tuesday and landed at Pyongyang International Airport, using an air route over the Yellow Sea. The athletes are mostly from South Korea’s men’s and women’s national basketball teams.

On Tuesday night, Pyongyang hosted a welcome dinner for the South Korean visitors at the capital’s famed Okryu Restaurant, which is best known for its cold noodles, naengmyeon.