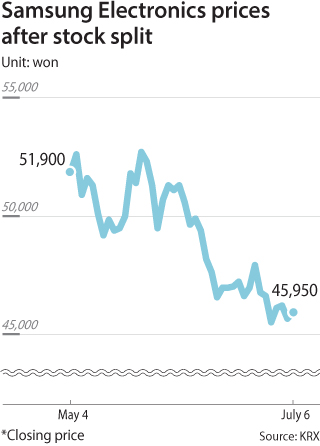 Have Samsung Electronics shares lost it?

Ever since the tech giant split the shares 50 to 1 at the end of April with the goal of making them “national shares” - more people could own them because each share would be much cheaper - the price of Samsung shares has been gradually going down. After seeing the price struggle since May, brokerage houses have rushed to slash target prices for Samsung shares.

Samsung Electronics ended 0.65 percent lower on Thursday at 45,950 won ($41), which is a fall of 13.3 percent from the starting price of 53,000 won on May 4, the first trading day after the split. The shares closed at 2,650,000 won on April 27, the last day of trading before they were divided and trading was suspended for several days. Moody’s revision on June 20 of Samsung’s credit rating from A1 to Aa3 didn’t help.

“Samsung shares have declined since May 4, hit by the departure of foreign investors,” said Park Won-jae, an analyst at Mirae Asset Daewoo. “The fact that foreign investors’ attention has been dispersed due to rival Xiaomi’s initial public offering is a negative factor.”

Since May, individual investors net purchased more than 2.5 trillion won worth of Samsung shares, while foreign investors net sold 248.4 billion won shares, according to the Korea Exchange.

Uncertainties over the government’s escalating pressure on Samsung Group to overhaul its governance structure and a probe of its Samsung BioLogics affiliate for accounting fraud have also weighed down the share price.

Samsung is set to unveil a second-quarter earnings guidance today and analysts’ consensus for the No. 1 semiconductor and smartphone producer’s operating profit has also gone down in the past month from 15.7 trillion won to 15.2 trillion won. Some have come up with an even more drastic projection of 14 trillion won, citing sluggish sales of smartphones and LCDs as well as reduced shipments of medium- and small-sized OLED panels.

The company saw its operating profit during the first three months of this year surge 58.03 percent from a year earlier to 15.64 trillion won, backed by favorable market conditions and strong demand for chips for servers.

A silver lining is seen with the third quarter, backed by the launch of the Galaxy Note9 and strong performance of semiconductors, said analysts.