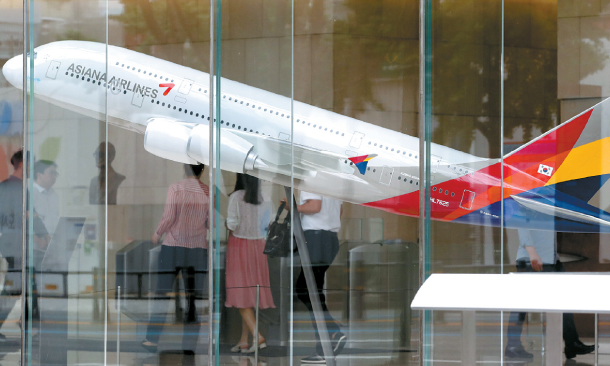 A model Asiana plane on display at the airline’s headquarters in Jongno District, central Seoul, Thursday. The company is still struggling to normalize operations. [YONHAP]

After four days without enough food, Asiana Airlines is finally confident that it can offer every passenger something to eat on its flights - although some diners will have to be content with a burrito.

The airline’s troubles continue, however, as it is now in a spat with rival Korean Air.

During a press conference on Wednesday, Kumho Asiana Chairman Park Sam-koo apologized for the messy situation and vowed that his company will do its best to ensure that all flights have meals onboard from Thursday.

The fiasco began on Sunday when Asiana Airlines’ new in-flight caterer Sharp DO & CO failed to make and deliver enough meals on time.

Park blamed Korean Air for the debacle, arguing that they didn’t do enough to help.

“We could have solved the supply problem with Korean Air’s help,” Park said, “but unfortunately, we couldn’t get their cooperation.”

“In Korea there are four businesses that cater in-flight meals - Korean Air’s internal catering business, LSG Sky Chefs, Sharp DO & CO and CSP,” Kim said. “LSG Sky Chefs were unable to help us, and though we requested help from Korean Air, we were not able to receive it.”

Until June 30, Lufthansa subsidiary LSG Sky Chefs had been supplying Asiana with in-flight meals. Before breaking ties with LSG, Asiana inked a 30-year deal with a joint venture it formed with HNA Group, the operator of China’s fourth-largest airline Hainan Airlines.

When a fire broke out on the construction site of the joint venture’s factory, Asiana ended up signing a three-month temporary contract with Sharp DO & CO and CSP from July 1 to Sept. 30.

According to both airlines, when the fire broke out on March 25, Asiana went to Korean Air to inquire about using its catering service.

In response, Korean Air answered that it would first have to review whether providing partial support in producing or loading in-flight meals for another airline went against customs laws, convincing Asiana to turn to Sharp DO & CO and CSP. Korean Air manufactures around 70,000 in-flight meals a day - three to four times more than Asiana requires.

Korean Air did eventually offer to supply meals to Asiana on Tuesday, three days into the crisis, according to an Asiana spokesman.

This time, it was Asiana who refused.

“Though Asiana appreciates Korean Air’s offer of help, we are now normalizing the process of manufacturing and loading in-flight meals,” said the spokesman on Thursday. “We will actively review [Korean Air’s offer] if we need support later.”

Park and Kim’s accusations came as a surprise to Korean Air, which had offered support only a day earlier.

“We were surprised and disappointed to hear Asiana Airlines implying that Korean Air had something to do with bringing about the no-meal crisis,” said a Korean Air spokesman. “We had even offered to have our employees work night shifts to help resolve the problem. Also, we were the ones waiting for Asiana to contact us again after they completed internal discussions on our facilities and regulations.”

Asiana’s situation has been gradually showing signs of normalization. Only one flight had been delayed on Thursday as of 5 p.m. for unrelated reasons and all passengers were offered either hot meals or burritos.

“Because we are providing the burritos in combo boxes along with yogurt, fruit, pudding and bread, this can be regarded as in-flight meals,” said an Asiana spokesman.

On Sunday, when the no-meal debacle first broke out, 51 flights were delayed for more than one hour and 36 planes flew without meals.

On Wednesday, only two flights were delayed and 24 departed with either incomplete or no meals.