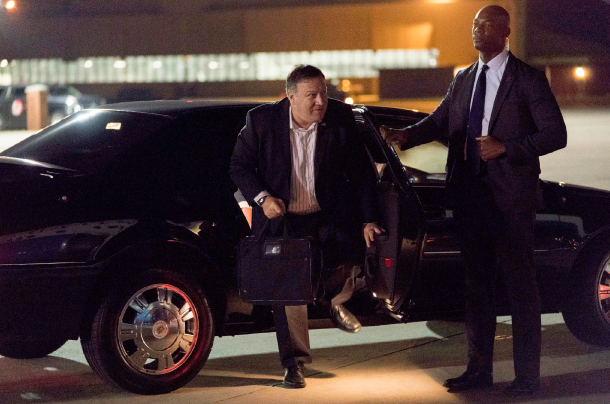 U.S. Secretary of State Mike Pompeo prepares to board a plane at Joint Base Andrews in Maryland on Thursday to travel to Anchorage, Alaska, on his way to Pyongyang, North Korea. Afterward, he will travel to Japan, Vietnam, Abu Dhabi and Brussels. [AP/YONHAP]

As U.S. Secretary of State Mike Pompeo begins his third trip to Pyongyang for negotiations on North Korea’s nuclear arsenal, he will likely advocate a step-by-step approach to denuclearization, backing down from the more extreme demand of complete, verifiable and irreversible denuclearization (CVID).

Reuters reported on Wednesday that Washington was shelving its “all or nothing” approach in favor of a more gradual process advocated by Seoul. South Korea argued that step-by-step negotiations were more likely to be successful than insisting North Korea yield to all U.S. demands before any concessions, citing two U.S. officials.

Entering into his first summit with North Korean leader Kim Jong-un, President Donald Trump and his administration adhered to the demand of CVID, a term that the George W. Bush administration coined in 2003. However, ahead of Pompeo’s latest trip to Pyongyang, his first since the summit, the U.S. State Department has replaced CVID with new terminology that seems to take into consideration Pyongyang’s natural aversion to such a unilateral demand.

In a statement on Monday announcing Pompeo’s visit to Pyongyang, which is scheduled to last through Saturday, the State Department said the secretary would also meet with South Korean and Japanese officials afterward to discuss the “final, fully verified denuclearization” of North Korea. Earlier, Pompeo himself used the new terminology, abbreviated as FFVD, in a Twitter post.

Since late May, U.S. and North Korean diplomats have held multiple rounds of talks about denuclearization. The latest on Sunday at the inter-Korean border village of Panmunjom.

In the discussion, Sung Kim, the U.S. ambassador to the Philippines and a former negotiator on North Korea’s nuclear weapons, failed to get North Korean officials led by Vice Foreign Minister Choe Son-hui to define the key terms of an eventual agreement, including words such as complete, verifiable and irreversible denuclearization.

The choice came to “bend it or break it,” one official told Reuters. Washington, according to the source, realized that maintaining cooperation with China and Russia over North Korea would be “more problematic if the U.S. stuck to an all-or-nothing posture.”

A senior South Korean official told U.S. officials in Washington in June that the United States should stop pressing for CVID from the North, according to Reuters. North Korea equated the term to a recipe for unilateral disarmament that would leave it vulnerable to regime change, Reuters reported, citing a source familiar with the discussions.

South Korea’s first vice minister of foreign affairs, Lim Sung-nam, met with U.S. Deputy Secretary of State John Sullivan in Washington on June 18 and 19. Lim was the first high-level official from Seoul to visit the United States after the Trump-Kim summit on June 12. South Korean authorities, though, would not confirm if their officials advised against CVID in discussions with officials in Washington.

“It is not appropriate to confirm the detailed discussions of South Korean and U.S. diplomatic officials,” Noh Kyu-duk, the spokesman for South Korea’s Ministry of Foreign Affairs, said at a briefing in Seoul on Thursday. “South Korea and the United States are having very close consultations on the joint goal of complete denuclearization of the Korean Peninsula.”

When asked whether South Korea and the United States still stood by the principle of CVID, Noh replied, “Yes, as confirmed in the inter-Korean declaration and the joint statement, there is no change in our joint goal of achieving complete denuclearization of the Korean Peninsula.” However, he stopped short of referring directly to CVID.

Pompeo is under considerable pressure to produce tangible results toward ascertaining North Korea’s commitment to denuclearization. He has adopted a softer tone, insisting there is “no timeline” for denuclearization.

In actuality, such remarks indicate tough negotiations ahead for a more concrete road map toward denuclearization, including the timing of a declaration of nuclear weapons sites and facilities and verification process.

After his visit to Pyongyang, Pompeo is scheduled to fly to Tokyo, where he will hold bilateral and trilateral talks with South Korean Foreign Minister Kang Kyung-wha and Japanese Foreign Minister Taro Kono and brief them on the results of his meeting with Kim.

The South Korean Ministry of Foreign Affairs said in a statement that Kang would be briefed by Pompeo “on the outcome of his latest visit to North Korea and will discuss in depth with her U.S. and Japanese counterparts’ possible next steps to achieve a complete denuclearization and establish a lasting peace regime on the Korean Peninsula.”

Pompeo made his first secret visit to Pyongyang when he was director of the Central Intelligence Agency and Trump’s nominee for secretary of state following the ousting of Rex Tillerson. His North Korean counterpart then was Kim Yong-chol, vice chairman of the Workers’ Party Central Committee in charge of inter-Korean affairs and former spy chief for North Korea.

Pompeo likewise maintained close communication with Suh Hoon, director of the South’s National Intelligence Service. Along with Chung Eui-yong, head of the Blue House’s National Security Office, Suh did the legwork in the early stages that led to the inter-Korean and North-U.S. summits.

While initial North-U.S. negotiations began through intelligence channels, diplomatic talks are now finding their place as officials from both sides hammer out a detailed denuclearization roadmap to follow up from the Singapore summit.

Kang and Pompeo have been in close communication since the secretary of state took his job in late April, and diplomatic sources say they have natural chemistry.