Rocker-turned-farmer wants to save the planet

Rocker-turned-farmer wants to save the planet 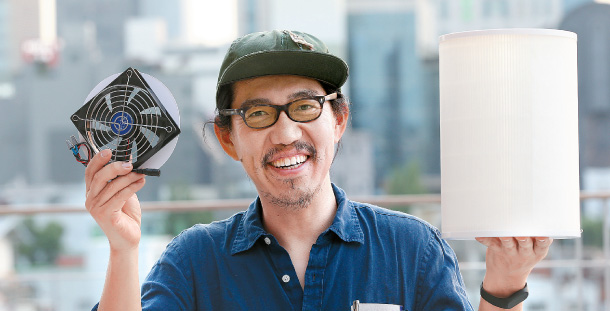 Cho Yun-seok, head of TenYearsAfter, an environmental advocacy group, holds up an energy-efficient air purifier that he devised. [LIM HYUN-DONG]

The simple contraption, made with just a filter, computer fan and motor, can clean the air of a small 200-square-foot room on just 350 won (30 cents) of electricity a month.

At least, that’s the claim made by Cho Yun-seok, head of TenYearsAfter, an environmental advocacy group that came up with the energy-efficient, low-cost Galaxy Air Purifier.

Some of his group’s campaigns are to teach the public how to make the air purifier and to promote green energy. Last month, 10 employees of TenYearsAfter painted the roof of a house in Majang-dong, eastern Seoul, using a special coating that can bring down the temperature of a building by as much as 5 degrees Celsius (41 degrees Fahrenheit) on a hot summer day by reflecting heat. The idea is that residents won’t have to use their air conditioners as much. The group has been painting houses since 2015.

Cho’s foray into environmentalism was accidental. He studied architecture at Hongik University and joined the Hwang Shin-hye Band as its bassist after graduating. A member of Seoul’s underground rock scene, he was one of the founders of Hope Market, a weekly crafts fair at the Hongdae Playground in western Seoul where local artists can sell their work.

Then in 2008, he left Seoul to become a farmer in Jangheung County, South Jeolla. There, he became interested in environmental issues.
“One winter, the temperature dropped to 8 degrees below average,” he said. “I tried to figure out why the temperature would drop so low when people said we were experiencing global warming, and I learned that the jet stream couldn’t contain the cold air with the North Pole melting.”

Cho ultimately returned to Seoul, but the experience in Jangheung changed him. He would fight for the earth now. In fact, the idea for energy-efficient air purifiers and heat-resistant roofs came from his time in the countryside.

“I built a bungalow-like house in Jangheung that would become so hot in the summer that I couldn’t even sleep,” Cho said. “That’s when I realized the effectiveness of insulators that can reflect heat.”

Making an air purifier, too, was simpler than he thought once he started studying it. His Galaxy Air Purifier is 55,000 won ($50), much cheaper than air purifiers sold by home appliance makers, which cost hundreds of thousands of won. They’re expensive because they can clean larger spaces, but they require a lot of electricity.

“It’s better to have small air purifiers in each room than just one large one,” Cho said.
Cho credits his farming experience for making him sensitive about the environment.