Kim Ji-hyun picks up first win of the season

Kim Ji-hyun picks up first win of the season 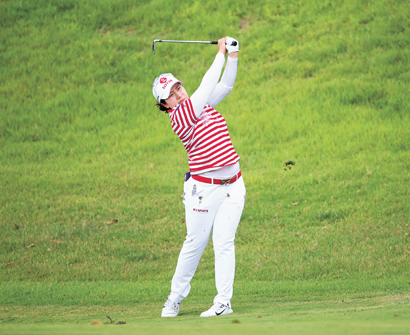 Kim Ji-hyun watches her shot during the final round of the Asiana Airlines Open at Weihai Point Hotel & Resort in China on Sunday. [KLPGA]

Kim Ji-hyun picked up her first win of the season at the Asiana Airlines Open at Weihai Point Hotel & Resort in Shandong, China on Sunday.

Kim, who started the final round with a one shot lead, started strong with back-to-back birdies on the first two holes. Bogeys on the par-4 seventh and par-3 13th allowed Cho Jeong-min to tie for the lead until the par-5 16th.

Kim made her move on the par-3 17th, making a four-meter long birdie putt to take back her sole lead at 11 under par and, after finishing the last hole with a par, Kim won the tournament without heading into a sudden death playoff.

Kim made her KLPGA Tour debut in 2011. She won a tournament each in the 2012 and 2013 seasons and then went winless for almost four years. She finally picked up her third win in Jeju last year but had once again struggled to continue her form until Sunday.

Though Kim has been struggling to get another win, she has been a consistent player, not missing a single cut in the 14 tournaments that she competed in this season.

This is Kim’s fourth KLPGA Tour victory and her first win in 13 months, since June last year. With the win, Kim took home the total prize money of 140 million won ($125,600). Kim is now ranked seventh on the KLPGA Tour’s 2018 money ranking and 12th in the Player of the Year point standing.

Feng Shanshan was the best finisher amongst Chinese players, finishing tied for 14th at two under par. Feng, who is ranked sixth in the Rolex women’s world ranking, has competed in a total of 14 KLPGA Tour events but has never won. Feng mainly plays on the LPGA Tour.

Despite a runner-up finish, Cho had an impressive final round, shooting seven under par to move up four spots. Choi Hye-jin, a rookie on the KLPGA Tour, finished fourth at seven under par.

Though Choi didn’t win the tournament, a fourth place has now allowed her to be the leader on the KLPGA Tour’s player of the year standing.

The tournament was co-hosted by the KLPGA Tour and the China LPGA Tour (CLPGA).

On the KPGA Tour, Ko Suk-woan won his first KPGA Tour event by defeating Lee Han-gu in the first playoff hole at the NS HomeShopping Gunsan CC Jeonbuk Open at the Gunsan Country Club in North Jeolla on Sunday.

Ko, who started the final round three shots behind the leader, started slow with a bogey on the first hole but successfully made it up with a birdie on the next hole, the par-5 second.

Ko made two more birdies in the front nine and finished the remaining round with pars to tie for the lead with Lee, at nine under par.

In the first playoff hole, Ko pushed his tee shot left into the deep rough, but hit an impressive shot from 170 yards to land it 1.8 meters from the flag.

Though Lee had an easier shot from the rough, he hit his second shot over the green. Lee made an up and down for a par but as Ko made his birdie putt, Ko finally earned his first win on the Tour.

“I always wondered how it would feel if I actually won a tournament, but once that moment came, I just couldn’t think of anything,” Ko said after the win.

Ko took home the total prize money of 100 million won. Prior to a win on Sunday, Ko, a rookie on the KPGA Tour, only made two cuts in the seven tournaments he has played in this season.