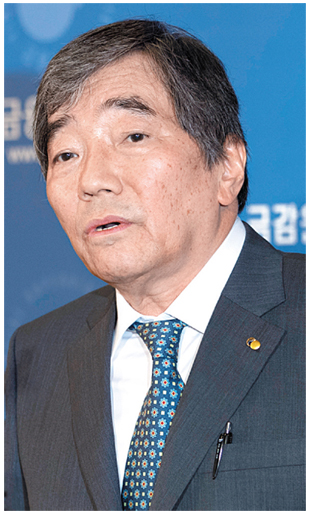 “Recently there has been a growing trend in the financial industry of sales of financial products to consumers without properly explaining the risks,” the FSS governor said on Monday during a press briefing. “I believe we will have to go to war with financial companies in the process of creating a mechanism to protect consumers.”

Yoon said the FSS will be stepping up supervision and inspections of the financial industry after many scandals among conventional financial institutions such as the so-called fat-finger case at Samsung Securities.

“What we have to notice is that IT development is creating new markets like P2P (peer-to-peer) loans,” Yoon said. “Therefore there is a need to strengthen regulation as eventually the people who will be victimized [in cases of fraud and accident] will be consumers.

“And it is the FSS responsibility [to protect the consumers].”

Yoon’s concern follows a number of fraud and embezzlement cases committed by tech-based financial companies and debacles at conventional financial institutions including the Samsung Securities fat-finger case, in which an employee disrupted the market by giving “ghost” shares to employees, and alleged accounting fraud by Samsung BioLogics to boost its value ahead of an initial public offering.

In the case of a P2P crisis, several business owners fled the country or closed shop after running away with investments.

Yoon’s tightening of supervision is a contrast to past administrations that emphasized lifting regulations, which were considered high bars that prevented tech-driven start-ups from entering the market with innovative services and products.

The FSS governor, however, said the agency will not always be tough, as once the consumer protection system reaches a certain level, the agency’s role will focusing on contributing to the industry’s expansion and development.

Meanwhile, the issue of whether to include an official recommended by labor unions as board members of financial companies is expected to resurface as the FSS governor said he favored the idea. He said the best solution in any case is to listen to every side, and therefore, the voice of a labor union should also be heard in an efficient way.

However, Yoon said whether to allow a union representative on a financial company’s board or not depends on a public approval process, such as public hearings.