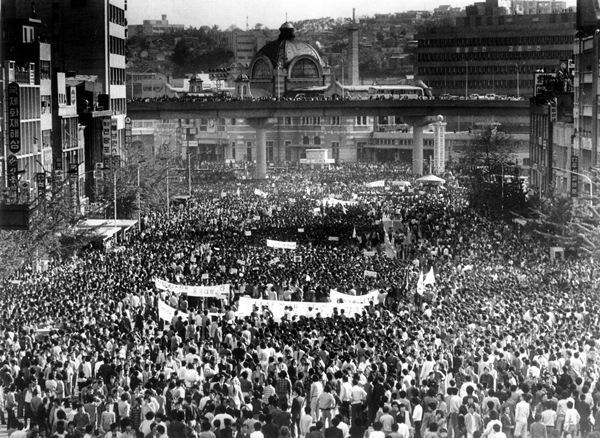 In June 1987, at the height of the democratization movement, a rumor of martial law spread. The police failed to control escalating protests, so then-president Chun Doo Hwan called in military officials on June 19 and ordered them to mobilize military force at 4 a.m. next day.

But a few hours later, the plan was put off. He later wrote in a memoir that it was a double trap, sending a warning to the extreme groups while urging Roh Tae-woo, head of the ruling party, to make up his mind as he was reluctant to accept a direct presidential election. Chun claimed he never planned to use military force and that it was a show. But he must have taken into consideration the opposition of the United States, citizens’ resistance and possible disobedience of the military.

Martial law has been declared ten times since the Republic of Korea was established. The first was during the Yeosu-Suncheon rebellion in 1948. Martial law was declared four times during the Syngman Rhee administration, four under Park Chung Hee and twice under Chun Doo Hwan. Martial law is a measure to have military forces keep order over society in a time of war or national emergency. But in Korea, dictators have used martial law to maintain their power.

Martial law, a term of history since the May 17 nationwide emergency martial law expansion in 1980, has reemerged. A ruling party lawmaker exposed a document that the Defense Security Command planned to implement martial law if Park Geun-hye’s impeachment was rejected. The Center for Military Human Rights made public a document outlining plans to mobilize specific military units. Upon learning the plan, citizens commented online that those who had attended the candlelight protests could have been killed.

Some argue that this allegation is exaggerated. The document assumed martial law would be declared if mobs took arms from police stations, attacked state facilities or if police were unable to keep peace and order. It also addressed chaos in case impeachment was upheld or rejected, warning of the far-right Taegeukgi group as well as the candlelight protesters. They argue that the document is a mere emergency plan for consideration, rather than for actual execution.

Do the authors of the document and those who exposed it know how the military would have really acted in such a situation? Would the martial law declared 38 years ago, when the per-capita national income was $1,600, be possible today when the national income is near $30,000? If so, would the United States and the international community condone it? Without understanding the circumstances for drafting such a document and exposing it, these imaginations are only fiction.