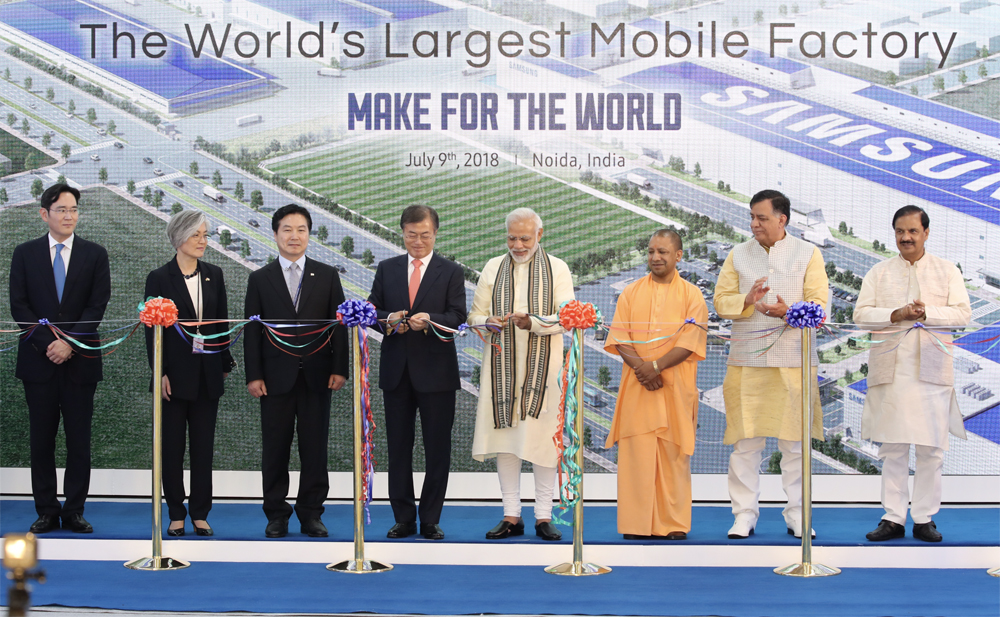 President Moon Jae-in and Samsung Electronics Vice Chairman Lee Jae-yong took part in a ceremony celebrating the expansion of a smartphone factory in Noida, south of the Indian capital of New Delhi on Monday.

It was the first time Moon as president participated in event held by Korea’s biggest and most important conglomerate.

For Vice Chairman Lee, the event was his first public appearance since he was freed from prison in February as he appeals bribery convictions. He was very low-profile during recent trips to Europe, North America and China.

The factory's expansion has made it possible for Samsung to churn out 10 million smartphones a month.

"The Noida factory currently produces 68 million smartphones a year and the annual production volume will grow to as much as 120 million by the end of 2020, when the factory goes into full operation," said a Samsung spokesman.

That capacity will be the largest for any smartphone factory in the world.

India is one of the fastest-growing smartphone markets in the world. China’s Xiaomi has the largest market share of 31.1 percent, trailed by Samsung at 26.2 percent and Vivo at 5.8 percent, according to April data from market researcher Counterpoint. Smartphones made in India are expected to account for nearly one third of the entire production in the world.

Samsung started doing business in India in 1995 and began mass producing TVs at the Noida factory in the following year. Mobile phone production began there in 2007.