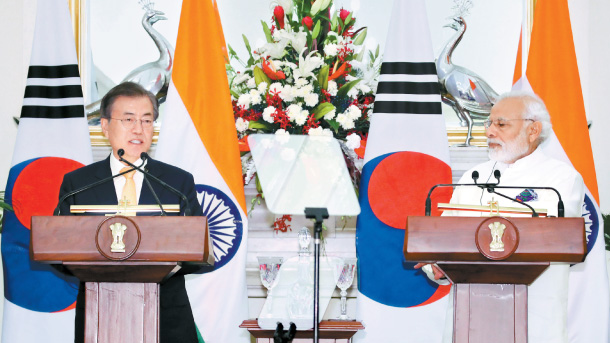 President Moon Jae-in pledged to more than double trade with India from the current $20 billion to $50 billion by 2030.

“India-Korea for the last 45 years developed bilateral relations in various fields and in 2015 on the occasion of Prime Minister [Narendra] Modi’s visit to South Korea escalated them to a special strategic partnership,” President Moon said on Tuesday at a press conference in New Delhi.

Moon said both countries have agreed to expand trade to $50 billion by 2030 by expanding economic cooperation through an economic partnership that complements each other’s strengths and potential.

“Today Prime Minister Modi and I have agreed to cooperate in enhancing people’s prosperity and peace and we have agreed on cooperating actively in creating future growth engines for the fourth industrial revolution [technologies],” Moon said. “We will be cooperating beyond conglomerates to connect promising small and medium-sized enterprises and start-ups in both countries and also in large-scale infrastructure projects in India from smart cities to the electric grid, railroads, roads, ports and renewable energy.”

Modi said Korean companies today have made an identity for themselves in the Indian household due to their commitment to the market.

“South Korea’s participation in our ‘Make in India’ mission has created many employment opportunities in India,” Modi said.

The two leaders, through a joint vision statement, agreed on speeding up the Comprehensive Economic Partnership Agreement (CEPA) utilization rate which, at the moment, is at 67.5 percent. A bilateral trade agreement between the two countries went into effect in 2010.

The two also agreed to simplify visa procedures that have kept businesses from entering each other’s markets.

The two countries signed a separate memorandum of understanding on easing trade regulations. India comes second after the United States in the number of trade regulations imposed on Korean exports.

Under the agreement, Korea and India will be expanding cooperation between scientific institutions, academic community and young professionals in research and development.

Also a Korea-India Future Strategy Group and the India-Korea Centre for Research and Innovation Cooperation will be set up in hopes of leading the fourth industrial revolution era.

But economic cooperation wasn’t the only issue. The two sides also agreed on working on solidifying peace in Asia.

“I believe that the positive environment that has been created is an effort of President Moon,” Modi said. “The proliferation links between North Asia and South Asia are a matter of concern of India. We will offer all cooperation in order to reduce tensions.”

The agreement includes enhanced military exchanges, training and experience-sharing as well as research and development in defense industries.

“Appreciating the commonalities in our views on a wide range of current regional and global issues, we agreed to strengthen existing bilateral dialogue mechanisms, including the Joint Commission Meeting led by Foreign Ministers, the vice ministerial 2+2 dialogue and the dialogue between the National Security Councils. In this context, the ROK [Republic of Korea] took note of India’s inclusive and cooperative vision for the Indo-Pacific region,” the vision statement stated. Republic of Korea is South Korea’s official name.

The first visit by Moon raised the possibility of using India as an alternative opportunity to China for Korean businesses particularly in the infrastructure and IT sector.

China’s retaliatory actions against Korean businesses in protest of the deployment of a U.S. antimissile system raised the need for Korea to lessen its dependence on it.

During the 2017 presidential race, Moon was pushing a “New Southern Policy” to raise relations with members of the Association of Southeast Asian Nations (Asean) and India to the level of other long-term Korean partners like the United States, China and Japan.

The Korea International Trade Association (KITA) estimates India will see average annual growth of 6.2 percent for the next 10 years.

Last year, Korea’s trade with India amounted to $20 billion with a surplus of $10.2 billion, an all-time record. Although exports to India only account for 2.6 percent of the total, which is far less than the 24.8 percent that China takes up and the United States’ 12 percent, think tanks like KITA and the state-run Korea Trade-Investment Promotion Agency (Kotra) have urged businesses to look at India’s market of 1.3 billion consumers. Especially as India under Prime Minister Modi has been upgrading its infrastructure, it is considered to hold many lucrative opportunities.

Most of the goods that are exported to India from Korea are steel plates, smartphones and fashion goods.

“The role of [Korean] businesses is very important in realizing joint prosperity [between Korea and India] through the ‘New Southern Policy’, which has been pushed by the Korean government” said Korea Chamber of Commerce and Industry Chairman Park Yong-maan on Monday during a business forum.