Violent assault in ER was shocking - but not the first one

Violent assault in ER was shocking - but not the first one

Left: Even after the arrival of a security guard to the scene of violence in an emergency room in Iksan, North Jeolla, the assailant continues to curse at the doctor and threatens to kill him. [KOREAN MEDICAL ASSOCIATION]

The release of security footage of a drunken patient in his 40s physically and verbally assaulting a doctor in the emergency room of a hospital in Iksan, North Jeolla, on July 1 has caused outrage in the online community.

The drunken patient did not stop his assault even after a security guard was dispatched to the scene. A cell phone recording of the incident showed the patient cursing while hurling a chair at the doctor. The 37-year old victim, director of the emergency department at the hospital, agreed to an interview with Joongang Ilbo on Thursday.

The victim’s hospital room was locked and his name was not posted outside as it usually would be. After two knocks by a reporter, the victim finally opened the door. Not only were his nose and teeth broken but his neck was sprained and he showed signs of a concussion. He also seemed to have post-traumatic stress disorder. The victim was terrified of being assaulted again and had good cause ? his assailant had been released by the police and was at large.

“It is hard to fully recall the incident. I would like to keep the interview short,” he repeatedly said. The following is the interview with the victim. 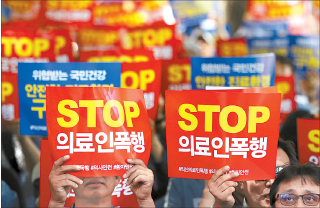 Q. The security camera footage shows that the assault continued even after a security guard had been dispatched to the scene.

A. The guard shown in the security camera footage was a security guard hired by the hospital. Private security guards do not have the authority to restrain violent assaults. A police officer was dispatched to the hospital six to seven minutes after the crime had occurred.

Did the violence continue after the scene captured by the security camera?

When I had come to my senses, I realized that my nose was bleeding. When I asked the patient why he had hit me, he just cursed at me. As soon as I started filming the scene to get evidence, he kicked me and the phone I had been holding fell on the ground. I just stood there dumbfounded because I hadn’t remembered getting hit. Then the guard came.

Did the officer immediately arrest the patient?

Even after the security guard came, the patient continued to say ‘I will kill you right after I get released from jail.’ Only when the patient had tried to kick me did the guard take him outside.

Do you think there was a problem in how the police handled the situation?

I would assume that you feel very insulted about what happened

It is hard for me to tell the story of what happened. The guard just stood there while the assailant incessantly cursed at me. I was enraged. I expected something like this to happen someday, but I didn’t think it would happen to me. Although it’ll be hard for me, I know I have to return to the emergency room for things to run smoothly around here again. It is important that incidents like this do not happen again.

“In regards to the incident in Iksan, we enforced the Emergency Medical Service Act,” said the police. “We take violence in the ER more seriously than in companies or stores.” The assailant was arrested last Thursday because he had violated the Emergency Medical Service Act but was released after two days. They justified the release by explaining that “he had to get his fractured finger treated.”

According to the Emergency Medical Service Act, people who interfere with emergency medical care or destroy medical facilities can be sentenced to up to five years in jail or fined up to 50 million won ($45,000), but this law is not easily upheld.

In a different hospital earlier this year, a patient came into the waiting room and threatened to kill himself if he did not get hospitalized immediately. The ER doctor in charge sprayed pepper spray to stop the patient from causing further damage. It was the doctor, not the patient, who was charged with assault and battery because he tried to contain the violent scene on his own.

“The prosecutor’s office dropped the charges against me, justifying it as an act of self-defense, but charges against the patient were also dropped because of insufficient evidence,” the doctor angrily said.

Fear in the medical community remains. Hundreds of health care workers from various medical organizations held a demonstration in front of the Korean National Police Agency in Seoul and called for the imprisonment of assailants of medical personnel and deployment of armed police officers in emergency rooms.

According to the Korean Medical Association, most cases related to the assault of medical personnel end with mere fines. Even when the Emergency Medical Service Act is applied, the maximum sentence is imprisonment for up to eight months and probation for two years. In the United States, the assault of medical personnel is considered second degree assault, a crime that can imprison assailants for up to seven years in jail. In Queensland, Australia, assault of a doctor, nurse, or a paramedic is punishable by 14 years of imprisonment. In Singapore, Police Posts were installed in general hospitals.

“I don’t think there are any doctors in the ER who haven’t been assaulted before,” Lee Kang-hyun, professor of Yonsei University Wonju College of Medicine said. “We need to properly enforce existing penalty clauses.”