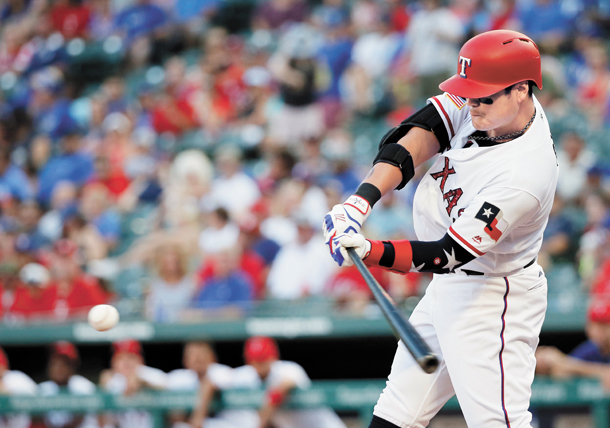 Choo Shin-soo of the Texas Rangers swings during a game against the Houston Astros on July 3. With another walk against the Boston Red Sox on Tuesday, Choo now shares the longest on-base streak of all active players in the major league, at 48. [AP/YONHAP]

Choo Shin-soo of the Texas Rangers extended his on-base streak to 48 games during a game against the Boston Red Sox at Fenway Park in Boston on Tuesday. The Rangers lost the game 8-4.

Prior to Tuesday’s game, Choo had set a new franchise record with his 47-game streak, exceeding the Rangers’ previous record of 46 games set by Julio Franco in 1993.

Choo was once again grounded out at the top of the sixth and was walked again at the top of the ninth, his 58th walk this season. Though he extended his on-base streak, Choo’s batting average slightly decreased after the game, from .293 to .290.

Choo’s 48 game streak is now tied for the longest on-base streak of any player that is currently active in the MLB. Choo shares the accolade with Joey Votto of the Cincinnati Reds and Albert Pujols of the Los Angeles Angels. Choo still has a long way to go if he hopes to break the all-time record - Ted Willims, formerly of the Red Sox, got on base for 84 consecutive games in 1949.

In addition to Choo’s historic on-base record, his home runs streak is a lot more impressive this season. As of Tuesday’s game, Choo has hit 17 home runs, well exceeding his previous record for the first half of the season, at 13.

But this isn’t just a personal achievement. Choo’s 17 home runs places him second in the Rangers ranking of home run hitters, behind Joey Gallo, who has hit a total of 21. Behind Choo, Nomar Mazara is ranked third with 15.

Considering Gallo’s batting average is only at .189 this season, Choo has been the Rangers’ dominant player in the batting lineup, showing both his accuracy and power. With Choo’s high number of home runs he has broken another record: hitting the most home runs among Asian players in major league history, exceeding Hideki Matsui’s 175. He has been continuously extending his own record and now has a total of 185 home runs throughout his major league career.

As a leadoff batter, Choo has hit three home runs, ranking fourth in the majors. Of the leadoff batters in the major league, Mookie Betts of the Red Sox is the leader, hitting 13 home runs in that position. This season, Betts has hit a total of 22 home runs.

In addition to Choo’s statistical achievement this season, he was selected to compete in this year’s MLB All-Star Game for the first time in his career. The annual competition pits the American League against the National League with each team getting 32 players.

The All-Star Game will take place next Tuesday at Nationals Park in Washington.