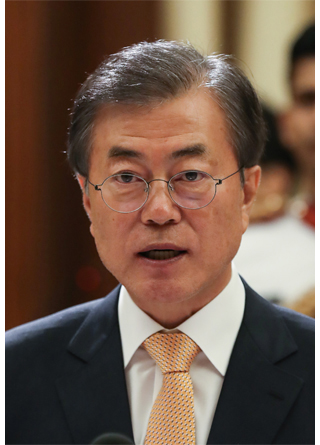 President Moon Jae-in said he is looking into declaring a formal end to the 1950-53 Korean War this year and discussions are underway among the two Koreas and the United States.

“As agreed in the Panmunjom Declaration, my government’s goal is to declare an end [to the Korean War] this year, the 65th anniversary of the signing of the armistice,” said the president in a written interview with The Straits Times conducted before an overseas trip to India and Singapore that kicked off Sunday. The Panmunjom Declaration was the product of the April 27 inter-Korean summit during which Moon and North Korean leader Kim Jong-un agreed to work for the “complete denuclearization” of the Korean Peninsula and formally end the Korean War.

“As for the timing and format [of the official declaration], we will closely consult with North Korea and the U.S. and others,” said Moon, who arrived in the island nation Wednesday night to begin a three-day stay there. “There have been additional discussions for that matter.”

Moon will begin his official activities Thursday morning by attending a welcome ceremony followed by meetings with Singaporean President Halimah Yacob and Prime Minister Lee Hsien Loong. Moon’s state visit to the financial hub is the first such visit in 15 years.

Looking back on diplomatic developments this year with North Korea, Moon said there have been achievements that were unimaginable in the past. And yet, the status of inter-Korean relations is fragile, he said, pointing out that it “has only been six months since inter-Korean relations were put back on track.”

On the suspension of joint Seoul-Washington military drills in the wake of the historic June 12 North-U.S. summit meeting in Singapore, Moon noted the decision was made to “lay down the basis of trust to sustain dialogue.

“North Korea made clear its commitment to complete denuclearization through the inter-Korean summit and the North-U.S. summit meetings,” said Moon, who has earned the nickname “Negotiator” for his crucial role in bringing North Korean leader Kim Jong-un and U.S. President Donald Trump to the negotiating table last month.

Citing the North’s demolition of its nuclear testing site in Punggye-ri, North Hamgyong Province, as one example of the North’s commitment to denuclearization, Moon said he and Trump agreed to suspend the joint drills while there was dialogue underway in consideration of the North’s demands.

Describing the fast-changing diplomacy this year that led to a handshake between Kim and Trump as a “major turnaround in world history,” Moon called on Pyongyang to present a more detailed denuclearization plan.

“What is important is having the leaders put their words into action,” said Moon.

Moon, however, said the issue of U.S. military presence in South Korea would not be affected by talks with North Korea.