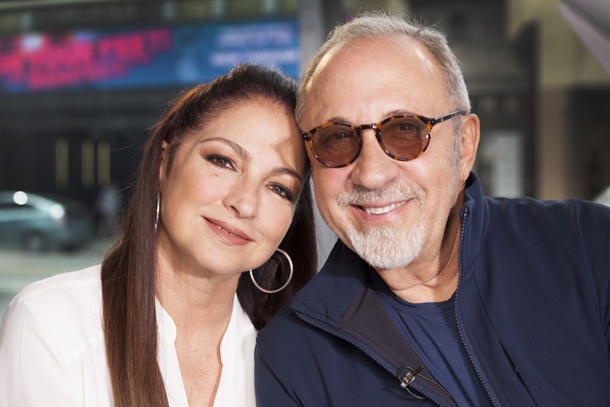 Gloria and Emilio Estefan at BiteSize Studio in Los Angeles to promote their touring musical “On Your Feet!.” [AP/YONHAP]

As the immigration debate has heated up, so have audiences’ reactions to scenes in the new stage musical that revolves around two immigrants, the Grammy winners said in a recent interview.

“On Your Feet!’’ tells the story of the Estefans, who fled Cuba, settled in Miami and eventually attained the American dream. They built a musical empire with a string of successes, including their signature song, “Conga.’’

The show officially opened in Los Angles on Tuesday, its latest stop after debuting on Broadway in summer 2015. It was in the middle of its 780-performance run when Trump was elected president and has turned hardline immigration reform into one of his signature policies.

“This was written, like, six years ago. I think it’s actually what is happening now,’’ Emilio Estefan said.

In addition to being a love story and a success story, “On Your Feet!’’ also portrays challenges faced by the Estefans, and many immigrants:

For example, how does one make a new home in a place where many say they want you to “Go home.’’

“[It was said] several times to us in our lives,’’ recalled Gloria Estefan, when asked about the current administration’s stand on immigration.

The show also deals with a continuing conflict for immigrants who want to hold on to their roots while also being accepted into the American mainstream.

The scene generating increasing applause portrays an argument that Gloria and Emilio have with their longtime manager, who is livid when the Estefans tell him they want to stop focusing on recordings in Spanish, in which they were dominant, and start recording in English to cross over to the pop charts.

Gloria Estefan recounted Emilio’s real-life response to the manager, which is included in the show: “I’m not sure where you think I live, but this is my home. And you should look very closely at my face, because whether you know it or not, this is what an American looks like.”

“The reaction we get in the crowd now [is bigger] than ever before, because it’s a feeling about [being] united,’’ Emilio Estefan said. “I think it’s a feeling about this country. And you don’t have to be Republican or Democrat. It’s about, you know, that you have to respect human beings.’’

Emilio Estefan said it’s important for immigrants to retain a sense of identity from their homeland. “You have a different last name. You have a different sound. You want to bring something new that people need to accept you the way that you are without changing your last name. I think it’s extremely important to send that message to any generation, especially millennials.’’

“On Your Feet!’’ is in the midst of an 80-city tour across the United States. It began its international run in the Netherlands October 2017. The Estefans said it will open on London’s West End in June 2019, and that dates in Japan and Latin America are on the horizon.