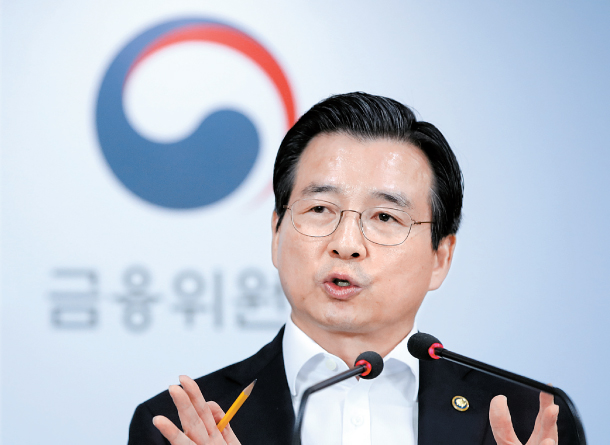 All exchanges of Samsung BioLogics shares were suspended at 4:40 p.m. on Thursday and were to remain suspended until 9 a.m. Friday after the Securities and Futures Commission (SFC) decided to turnover the biopharmaceutical company and its CEO to the prosecutors’ office on charges of accounting fraud.

The SFC also recommended that the biopharmaceutical company remove the executives involved, but also prevented Samjong KPMG, which was the auditor of the company, from auditing Samsung BioLogics for the next four years. The financial authorities will assign an auditor for the next three years.

“Samsung BioLogics has committed a serious violation on its accounting practices and we have come to the conclusion that despite clearly knowing the possibility of the violation, the company intentionally omitted it from public notification,” said SFC Commissioner Kim Yong-beom during a press conference that took place at 4 p.m., 30 minutes after the Korean stock market was closed.

The controversy dates back to the end of 2015, when the biopharmaceutical company converted the status of Samsung Bioepis, a biosimilar unit, from a subsidiary to an affiliate. Samsung BioLogics cited the potential threat that Biogen, a U.S. biotech firm, might administer a call option to raise its stake to as much as 49.9 percent, thus depriving BioLogics of control of Bioepis.

As a result the company, which has suffered losses in previous years, reported a turn around of 1.9 trillion won ($1.7 billion) in profit. The Financial Supervisory Service took notice of the sudden change and found that when converting Samsung Bioepis into an affiliate the share value was revaluated from face value, which was worth 300 billion won, to market value, valued at 4.8 trillion won.

Samsung BioLogics, which admitted during a press conference earlier this year that it has received a letter from the U.S. biopharmaceutical company exercising its call option, did not disclose the request.

Samsung BioLogics’ inflated valuation was considered one of the key factors that contributed to the company’s successful IPO in 2016. It was the second-largest ever IPO in the Korean market after Samsung Life Insurance.

Biogen on June 30 announced its decision to exercise its call option on Samsung Bioepis, raising its stakes to 49.9 percent. Currently the U.S. firm owns a 5.4 percent and Samsung BioLogics owns 94.6 percent. Samsung Bioepis was founded by the two companies in 2012.

While there was speculation that the company could undergo a review to be delisted from the stock market, the Financial Services Commission denied such a possibility.

The FSC said that despite the accounting fraud case being passed to the prosecutors’ office for further investigation, the company will not be reviewed for delisting as the related regulations are managed by the Korean stock exchange operator, the Korea Exchange.

Samsung BioLogics said it will take every legal action it can, including an administrative suit, claiming that it has followed all of the International Financial Reporting Standards (IFRS).

“We have followed every process fully and tried to explain the best that we can in trying to convince the appropriate accounting actions,” Samsung BioLogics said in a statement released Thursday. “Despite our efforts, we regret the decision that was announced.”