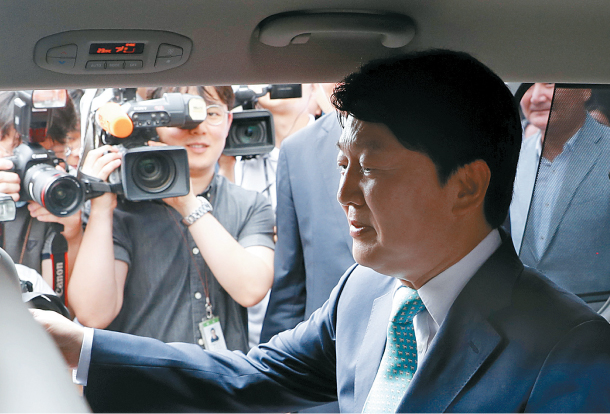 Former Bareunmirae Chairman Ahn Cheol-soo gets in a car in Yeouido, western Seoul, on Thursday after having a press conference to announce his temporary retirement from politics. [YONHAP]

Former Bareunmirae Chairman Ahn Cheol-soo said Thursday he would retire from politics for a “time of reflection and learning” in the wake of his humiliating defeat in the Seoul mayoral election in which he came third.

Ahn, a former software billionaire who entered politics seven years ago with high support from the youth and who set his sights on such top positions as Seoul Mayor and president of South Korea, did not rule out the possibility of a comeback, saying he “wasn’t sure about how things would end.

“I wish to have a time of reflection and learning after retiring from the frontline of politics,” said Ahn. Although he strived very hard “to open an era of a multiparty system and political reform,” he admitted to his many shortcomings before reporters at a cafe in Yeouido, central Seoul.

“It makes my heart ache for I have not been able to answer the people’s wishes for change,” noted Ahn, who ran for president in both 2012 and 2017. In 2012, he was outmaneuvered by Moon Jae-in for the liberal candidacy. In 2017, he came in third after Moon and Hong Joon-pyo, a former chairman of the Liberty Korea Party.

Ahn said he would travel around the world for experiences and to learn.

“I will contemplate what direction we should take going forward while seeing challenges facing many nations around the world,” he continued, which suggested an ultimate return to the political scene.

He said he would first visit Germany to have a closer look at global challenges in light of the fourth industrial revolution. He did not say when he would return to Korea.

Ahn’s announcement Thursday came after an uninterrupted series of political failures despite considerable fanfare when he put himself at the center of Korean politics in 2012.

Promising to bring change and reform to Korean politics, Ahn flirted with running for Seoul mayor in a 2011 by-election until bowing out and supporting Park Won-soon, who won.

The medical doctor-turned-entrepreneur declared a bid for president as an independent in September 2012, three months before the election, though he had never held elected office.

Ahn ended up yielding his candidacy to Moon to prevent splitting the liberal vote. Moon lost to Park Geun-hye by a margin of less than 4 percent, which kept conservatives in power until Park’s impeachment and removal from power and subsequent by-elections in May 2017.

Following the 2012 election, Ahn shared control with Kim Han-gil of the Democratic Party, which was the Democratic United Party at the time, as a co-chairman. But in late 2015, he defected from the party in protest of the Moon Jae-in faction’s control of the party and formed the more moderate People’s Party in the name of creating a multiparty parliamentary system.

Ahn’s promises of a multiparty system seemed to have worked in April 2016 when his party dominated districts in the Jeolla region, the stronghold for Democrats, and won 38 seats in total in the general election.

But Ahn’s second bid for president failed again in May 2017 after lackluster debate performances. Ahn came in a distant third with 21.4 percent of the vote.

Three months after his presidential defeat, he ran for chairmanship of the People’s Party and won. Ahn then engineered the merger of his party with the Bareun Party to create the centrist Bareunmirae Party. In an attempt to reignite his political fortunes, Ahn ran for Seoul mayor in the June 13 local elections. He finished third behind incumbent Mayor Park Won-soon and Kim Moon-soo of the Liberty Korea Party.