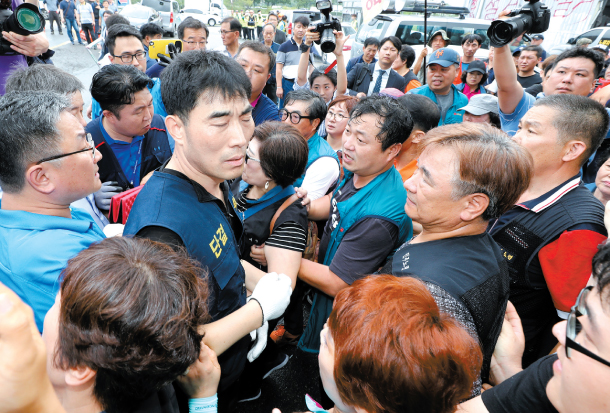 Merchants clash with law enforcement over a court order to relocate their shops to a new building in front of the Noryangjin Fisheries Wholesale Market in southern Seoul on Thursday. [YONHAP]

Angry vendors at a major fish market in southern Seoul clashed on Thursday with officials who attempted to carry out a court order to forcibly relocate their shops.

About 150 merchants at the Noryangjin Fisheries Wholesale Market tussled with 300 enforcement officers and blocked the entrance to their shops. The merchants called the terms of the deal unfair and urged the officers not to execute the court order.

The skirmish continued for about an hour and a half until 9:30 a.m. when the officers pulled out.

The National Federation of Fisheries Cooperatives, the market’s proprietor, won a court order to enforce the relocation of 95 stores that have resisted moving into a new location. The Seoul Central District Court granted the order after the Supreme Court upheld the cooperative’s push for the relocation.

The move is part of a modernization project aimed at demolishing the decades-old market and renovating the area. There are concerns about safety and other infrastructure issues in the 48-year-old fish market, and the cooperative launched a government-funded plan in 2004 to overhaul the establishment. The renovated market, located on the same premises, opened in March 2016.

While the majority of existing merchants and wholesalers has agreed to the relocation and moved into the new building, other vendors still refuse to relocate, primarily because of unsatisfactory compensation and higher rent. They have also insisted that the new space is unfit for fish shops and too cramped to run their business, which is a cross between retail and wholesale.

The cooperative said it has offered 30 billion won ($26.6 million) in supplementary support for the merchants and will seek to resolve the matter through negotiations. It stressed the relocation was inevitable, citing the danger of potential accidents from deterioration in the old market.

A representative of the opposing merchants said they would not back down until the cooperative “guarantees our survival and leaves the old market in place.”