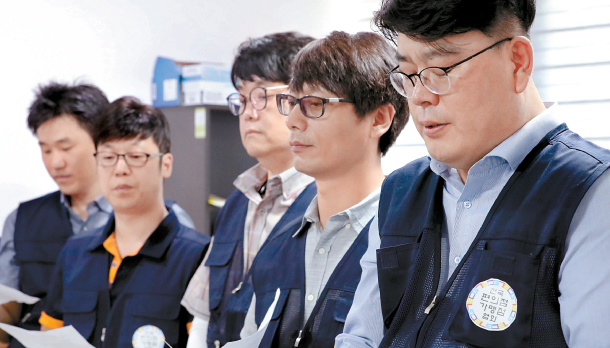 Members of a national association of convenience store owners in Korea urge the government to apply a different minimum wage to small businesses at a press conference held Monday at the association’s headquarters in Seongbuk District, northern Seoul. [YONHAP]

Korea’s convenience store owners urged the government to apply a different wage standard to small businesses on Monday, but retreated on earlier claims that they would launch store closures and hike product prices to protest the increase to the minimum wage.

In response to the government’s decision over the weekend to increase the minimum wage by 10.8 percent next year, the national association of convenience store owners announced a set of requests to the government and their franchise headquarters. The association is composed of more than 4,000 CU, GS25, 7-Eleven and Emart24 franchisees.

The association urged the government to apply different wage standards to businesses with less than five employees and asked companies to lower their royalty fees.

“The 29-percent increase to the minimum wage over two years is drastic, and jeopardizes the convenience store industry,” the association said in a statement released on Monday. “If there are no fundamental policy changes to the minimum wage, the conflict will only get worse next year.”

The association said in a press conference on the same day that it will not immediately begin the “collective action” they mentioned last week, which would include increasing product prices at night and simultaneously closing stores nationwide at a particular time.

But it also said that, if discussions with the government and company headquarters are ineffective, they will again consider introducing these measures. Convenience store owners are directly affected by the increases to the minimum wage as they pay part-time workers the exact legal limit. The first blow came at the beginning of this year as the hourly minimum wage was increased by 16.5 percent.

The association of convenience store owners analyzed the bills of 15,000 conveniences stores nationwide and said that next year’s wage hike will slash off 500,000 won ($444) from store owners’ monthly net profit of 1.8 million won.

The calculation was based on the fact that an average convenience store makes about 54 million won in revenue a month. After paying royalty fees (4.37 million won), rent (2.5 million won), labor costs (4.63 million won) and operational costs (920,000 won), owners are currently left with 1.8 million won.

“The owner is left with a profit that is almost equivalent to that of a part-timer,” said Sung In-je, one of the association’s heads and an operator of a GS25 store.

Labor costs are about double rent expenses, in contrast to some prevailing opinions that the real burden for convenience stores is not wages but rent. The association’s analysis calculated the costs of employing three workers in the weekdays, two on the weekends and the owner working five days a week.

“Rent differs greatly depending on the branch and region, but the minimum wage hike will deal an equal blow to every store in the nation,” said Sung.

Rising costs wouldn’t be as much as of an issue if revenue was also increasing steadily. But convenience store owners are also grappling with high commission fees for credit cards and small product margins.

The commission fee for using credit cards at convenience stores is 2.5 percent. This rate is slightly higher than the 2 percent discount chains and department stores pay.

“We’re not trying to refuse to pay wages, we’re saying we need measures that could keep us afloat,” said Kye. According to the association, convenience store owners can’t immediately close their businesses when they want to because they operate on a contract with the franchise headquarters.

Some industry watchers say the current situation can be understood through the larger prism of market restructuring.

“The number of convenience stores has boomed recently, and although this expanded revenues for company headquarters, the earnings of each individual branch fell,” said Jeong Joong-yeol, an expert in franchise law certified by the Fair Trade Commission.