Keep your shirt on

Keep your shirt on

LEE TAE-YUN
The author is a national news reporter of the JoongAng Ilbo. 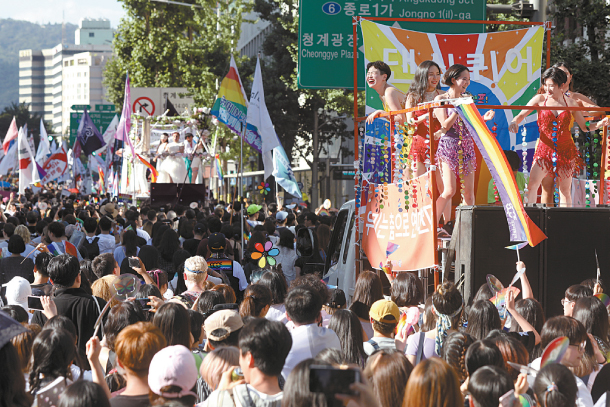 It was hot and humid with temperatures going up to 33 degrees Celsius (91 degrees Fahrenheit), but Seoul Plaza was crowded. On July 14, the 19th Seoul Queer Cultural Festival drew LGBT participants and supporters. The festival organizer claims that 120,000 people attended the event. As many as 105 booths were set up in Seoul Plaza, including groups representing sexual minorities, embassies of 13 countries and the Delegation of the European Union to the Republic of Korea, the National Human Rights Commission and local community groups. The festival also presented musical performances by singers who support gay rights.

It was in 2000 that a queer festival was first held in Korea. The first event in Daehangno was attended by some 50 people. Nineteen years have passed and more and more people show interest in the human rights of sexual minorities. Since 2015 the pride festival has been held in Seoul Plaza. The number of attendees has been on the rise as well —15,000 people participated in 2015, 30,000 in 2016 and 50,000 last year.

At the festival, products such as soap and cookies shaped like genitalia were shown. Adult products were on sale, and posters hinting at sexual acts between men were on display.

In the afternoon, there were participants who wore revealing outfits and went topless. A parent who saw the scene said that many families visit Seoul Plaza and the festival should be enjoyed by people of all ages and be a chance to think about sexual minorities.