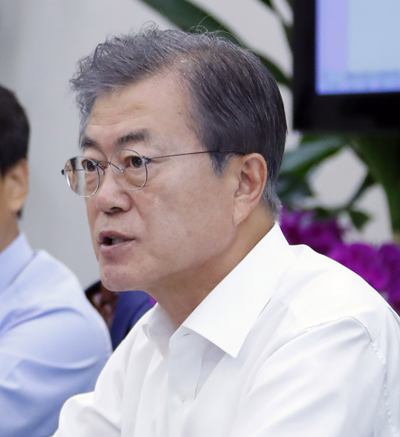 President Moon Jae-in admitted Monday he won’t fulfill his campaign pledge to raise the minimum wage to 10,000 won ($8.86) by 2020, after anguished protests about rising labor costs from small business owners and concerns voiced by at least one top member of his administration.

“As a result of the decision by the Minimum Wage Commission, it became difficult to achieve the target of raising the minimum wage to 10,000 won by 2020,” Moon said during a meeting with his senior secretaries at the Blue House on Monday. “I offer my apologies for being unable to keep my pledge.”

The president added that he respects the decision by the commission to keep next year’s minimum wage hike lower than expected and said the government will do its best to realize a 10,000 won minimum wage as early as possible.

Moon’s five-year term ends in May 2022. Moon expressed his appreciation to the commission for raising next year’s minimum wage by more than 10 percent.

The commission, which is comprised of the representatives of the government, workers and employers, decided on Saturday to push up the hourly base salary by 10.9 percent to 8,350 won next year. Representatives of companies boycotted the meeting.

“The pace of the increase should not be a mechanical goal and I do not think it is something that’s attainable just through the will of the government,” Moon said. “The government must prioritize guaranteeing quality lives for low-income earners through minimum wage hikes and increase household incomes to boost domestic consumption and improve the economy, which would eventually increase the number of jobs.”

The president admitted that it is important for the Korean economy to be able to handle the minimum wage increases and said the government will roll out measures such as expanding the earned income tax for low-wage earners and subsidies for local companies when they create jobs.

Moon’s statement came the same day as a remark by Kim Dong-yeon, who is the country’s finance minister and Moon government’s economics chief, that the 10.9-percent minimum wage increase will be a burden on the economy.

“I understand the decision was necessary to address issues such as [unfair] income distribution and [worsening] wealth polarization in Korea and [to help] workers in vulnerable positions,” Kim told local reporters after a meeting with Lee Ju-yeol, the governor of the Bank of Korea, Monday morning. “But from the perspective of running the country’s economy in the second half, I am concerned that the raise could come as a burden [to policymakers].”

Kim added that the negative side effects from the minimum wage increase this year - a 16.4 percent jump to 7,530 won, which was the most drastic hike in nearly 20 years - are becoming clearer, especially for certain sectors and age groups.

Recent data by Statistics Korea showed that employment in industries, such as food and lodging, as well as retail and wholesale has been on the decline since the beginning of the year. Jobs in those sectors often pay minimum wage.

Kim also signaled the possibility of the government decreasing its subsidy to employers next year.

This year, the government allotted nearly three trillion won to help employers brace for the impact of the minimum wage hike, according to Kim.

“The government is trying to implement various support measures for the self-employed and small business owners," Kim said. "But the government intervening in the market by pouring in subsidies isn’t appropriate.”

Hong Jong-hak, minister for SMEs and Startups, called on big companies to allow small and mid-sized enterprises to reflect the increase in their labor costs in the price they charge them for goods and services in a meeting with Park Sung-taek, chairman of the Korea Federation of SMEs, in Yeouido, western Seoul. Hong urged Korean workers and executives of unions to start a movement to increase their purchases from small businesses.