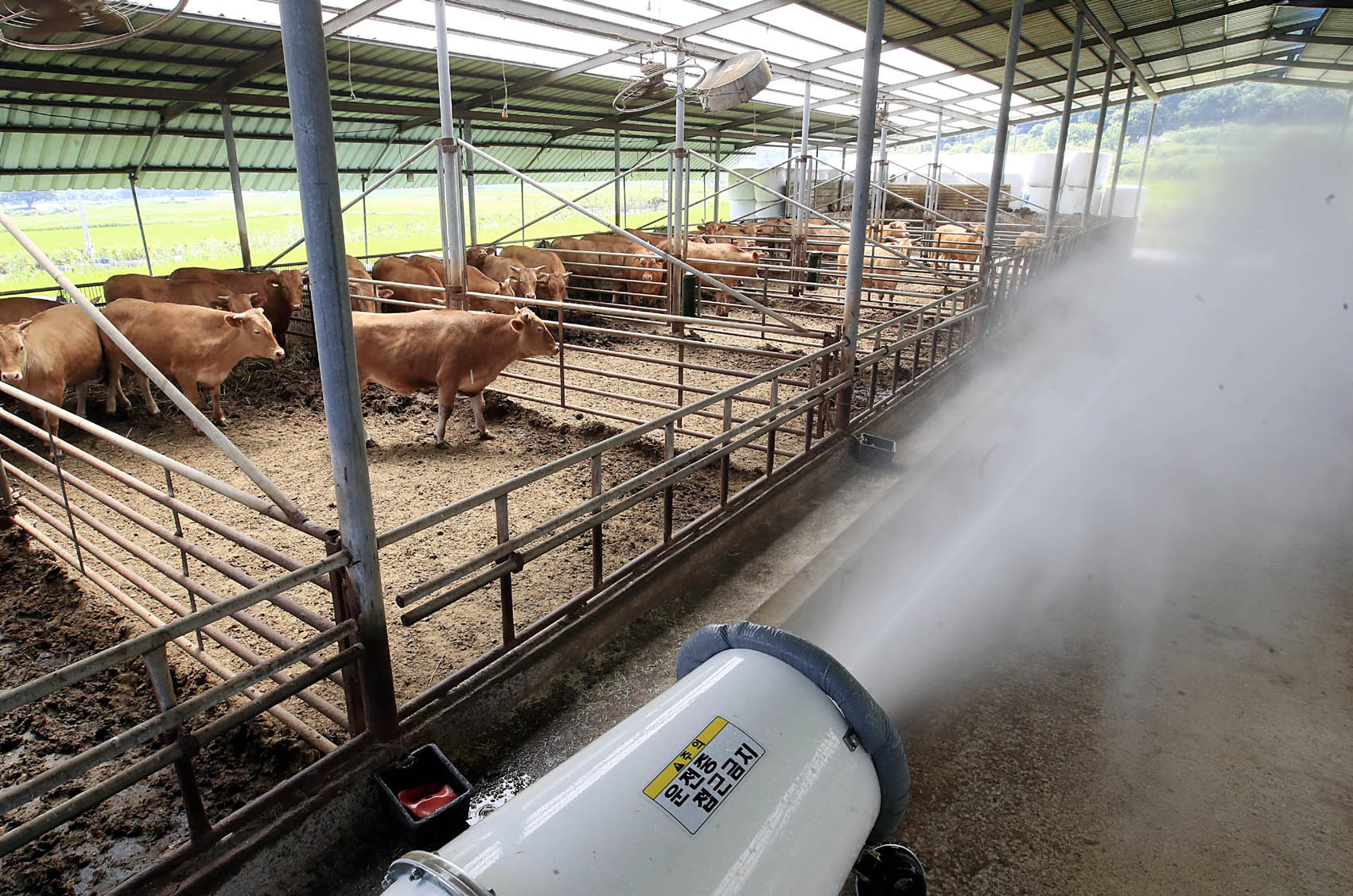 Officials from Buk District Office in Gwangju spray water to cool off cattle in pens on Tuesday as a scorching heat wave sweeps the country. [YONHAP]


Four people died and more than 500 people got sick from the heat in the past two months, the Korea Centers for Disease Control and Prevention (KCDC) said Tuesday – more than half of them over the past few days.

From May 20 to Sunday, 551 people suffered problems due to lengthened exposure to the sun, including headaches, dizziness, muscle spasms and sunstrokes, of whom four died, the KCDC said in a statement. Of the 551 cases, 285, or 52 percent, took place from Thursday to Sunday.

The Korea Meteorological Administration issued heat wave advisories and warnings throughout the country on Tuesday. A heat wave advisory is issued when the highest temperature is expected to be above 33 degrees Celsius (91.4 degrees Fahrenheit) for two days or more. A heat wave warning is issued when the highest temperature during the day is expected to be higher than 35 degrees Celsius for over two days.

Heat wave advisories and warnings were issued in the South Gyeongsang region nine times from June 22 to Tuesday, according to the Korea Meteorological Administration. They were issued five times in the same period in the Seoul, Gyeonggi and Incheon regions.
For natural disasters, including heat wave warnings, the Ministry of the Interior sends out warning messages with loud siren sounds via cell phones. It does not send out a warning text message for heat wave advisories. Among the five heat wave advisories and warnings issued in Seoul from June 22 to Tuesday, only one was a heat wave warning, which was on Monday.

Out of the 551 cases of people having heat-related health problems, the greatest number – 97 – occurred in South Gyeongsang. There were 65 in Gyeonggi, 64 in North Gyeongsang, 50 in South Jeolla, 40 in Gangwon and 33 in Seoul.

“In the past five years, there have been 6,500 cases of heat-related illnesses reported to the center, and 40 percent of these cases took place between 12 p.m. and 5 p.m. at an outdoor space, usually a farmer’s field,” the KCDC said. “We request people that avoid outdoor activities during the afternoon when heat wave warnings are issued.”

The Ministry of Agriculture, Food and Rural Affairs said about 50 out of the 551 people who suffered heat-related illnesses were farmers.
In a press briefing Tuesday at its headquarters in Sejong, the ministry announced that as many as 790,000 livestock in Korea have died as of Tuesday due to the heat of the last couple of weeks. This was nearly 30 percent more than during the same period last year when around 600,000 animals died.

The Agriculture Ministry estimates that this has caused as much as 4.2 billion won ($3.7 million) in financial damages to farmers.
“The rainy season came to an end much earlier than expected, so the heat wave arrived earlier than usual,” said Lee Ju-myeung, director general at the agricultural policy bureau of the ministry. “The heat wave will stay until early August, so we believe the damage caused by the weather to farmers will increase.”

The Agriculture Ministry said farmers can be compensated for the death of their livestock if they have government disaster insurance. Thirty-four farms have received compensation worth 220 million won so far, the ministry explained. Farmers who have not subscribed to the insurance will receive some damage relief from the government, the ministry added.