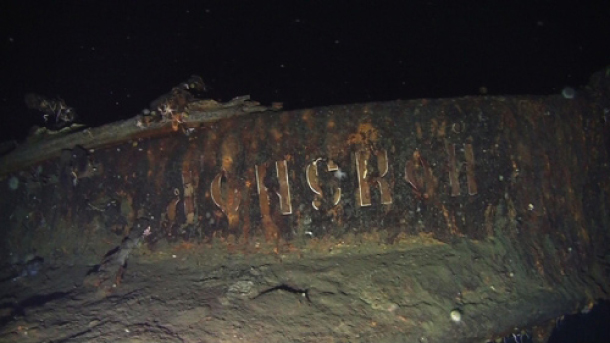 What’s claimed to be the exterior of sunken Russian ship Dmitri Donskoi is shown above. Shinil Group claims it found the sunken ship and that the ship may contain treasures valued at around 150 trillion won (＄132.6 billion). [SHINIL GROUP]

A rumored Russian treasure ship that sank over a century ago known as the “Dmitri Donskoi” has been discovered in the waters off of Korea’s Ulleung Island in the East Sea.

Shinil Group said that it found a ship on Sunday with the word Donskoi written on its exterior in waters about 1.3 kilometers (1,421 yards) away from the island and about 434 meters underwater. The company is claiming that it may be the Russian ship which was hit by Japanese forces near Ulleung Island during the Russo-Japanese War in 1905. It is rumored that the sunken ship has about 150 trillion won (＄132.6 billion) worth of gold bars and other treasures on board.

The company said it will release more details if any treasure is found inside the ship on either July 24 or 25. It had originally planned to hold a press conference on the discovery this week, but decided to delay the announcement, saying that they wanted to invite foreign media as well.

“We have confirmed that there is a thing that looks to be a treasure box, but we have not opened it yet,” said the company’s public relations manager. Law requires parties to get permission before recovering or excavating a vessel. The Ministry of Oceans and Fisheries said that the company has not yet requested permission, the Korea JoongAng Daily confirmed, but the company said it will request permission on Monday.

Chin Kyo-jung, an expert on recovering sunken ships, who is currently consulting Shinil Group, said that the company signed a memorandum of understanding with China Yantai Salvage in June to discuss possible ship recovery options. 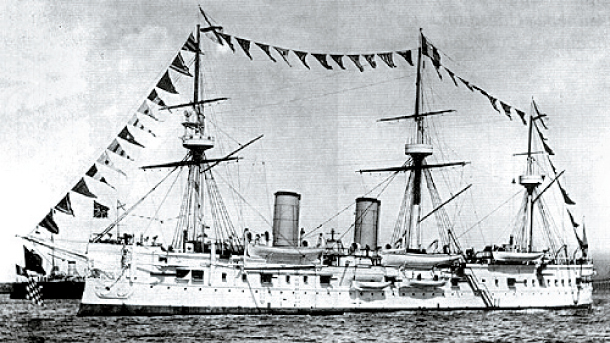 The photo of the Russian ship Dmitri Donskoi, which sunk 113 years ago. [ASIA PACIFIC CENTER FOR THEORETICAL PHYSICS]

He said officials with China Yantai Salvage will come to Korea on July 28 to discuss a plan. The company said in a press release that the recovery of the ship will take three to six months if the weather allows.

The company claiming to have found the buried treasure is reported to have been established about 50 days ago. This month, it announced that it would acquire Jeil Steel. With Shinil Group’s announcement of the discovery of the treasure ship, Jeil Steel’s stock jumped from 4,160 won on Tuesday to 5,400 won on Wednesday.

A company called Dojin Sireop attempted to lift the vessel in 1981, while Dong Ah Construction Industrial Company also failed to recover a ship they claimed to be the Donskoi in 1998. The construction company went bankrupt in 2001.