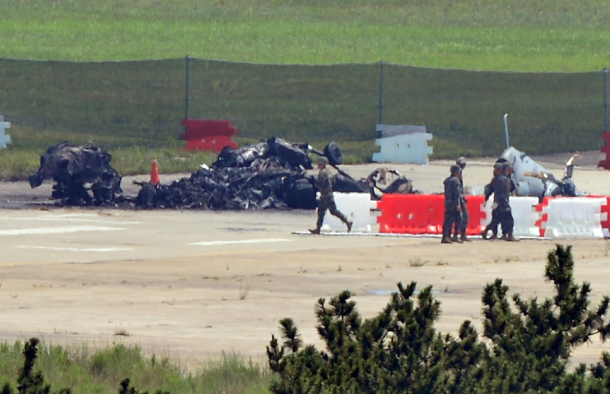 Investigators examine the debris of the helicopter that crashed on Tuesday left on the runway at a Navy base in Pohang, North Gyeongsang, on Wednesday. [YONHAP]

Military authorities launched an investigation into the cause of the helicopter crash Tuesday that killed five soldiers and wounded one at a Navy base in Pohang, North Gyeongsang. The probe has the potential to reignite controversy over corruption in the defense industry.

An MUH-1 amphibious helicopter - often referred to as Marine One - was starting a test flight on Tuesday when it suddenly crashed on a runway at the Korean Navy’s Sixth Air Wing base at 4:46 p.m. Five of its passengers, including its 45-year-old pilot, were killed after the helicopter caught fire after hitting the ground.

The five dead marines are to be posthumously promoted by one rank and interred at the Daejeon National Cemetery, said the Marine Corps on Tuesday. A memorial altar has been set up at the Marine 1st Division base in Pohang.

The single survivor of the accident, an aircraft maintenance mechanic with the rank of master sergeant, recovered consciousness at Ulsan University Hospital on Wednesday. The marine suffered heavy abrasions to his face and knee, and is currently on a ventilator.

To discover the exact cause of the crash, military authorities Tuesday evening launched a joint investigative committee consisting of 23 officials from the Marine Corps, Navy, Air Force, Defense Agency for Technology and Quality and the Army’s aviation operations command.

A spokesman for the Marines said investigators have not ruled out the possibility of mechanical defects leading to the accident, given that the deceased pilot had over 3,000 hours of flight experience. The chopper was hovering at an altitude of 10 meters (33 feet) after lifting off when it suddenly went down.

Analysts are saying that mechanical faults could be linked to an expedited manufacturing process by the Korea Aerospace Industries (KAI), which built the helicopter. A spokesman for the company expressed condolences for the dead soldiers on Tuesday and said it would fully cooperate with the probe.

The Marine Corps planned to deploy 28 MUH-1 helicopters by 2023, but those plans may be derailed with Tuesday’s accident. Four - including the one that crashed on Tuesday - have already been procured, but the remaining three will be grounded until authorities can verify the aircrafts’ safety.

A modified version of the KUH-1 Surion helicopter used by the Army and Navy, Marine One was adapted to conduct amphibious operations to suit the Marine Corps’ purposes.

The Surion chopper, however, has been the subject of frequent criticism from defense analysts who panned the aircraft as a “tin can chopper” due to its frequent mechanical defects. A report by the Board of Audit and Inspection this July described the Surion helicopter as “lacking safety for military flights, much less regular use.”

On Wednesday, the Army announced it would temporarily suspend use of all its Surion choppers. More than 90 are currently deployed at army divisions across the country.

Choo Mi-ae, head of the ruling Democratic Party, on Wednesday connected the accident to potential corruption in the defense industry at large. “We urge military authorities to devise measures to guarantee the safety and health of our troops as well as thoroughly investigate the possible involvement of corruption in the defense industry,” she said.

Since 1987, when it separated from the Navy, the Marine Corps has relied on leased choppers from the Army or Navy for amphibious training exercises. It created a 3,000-man amphibious rapid deployment brigade in 2016.