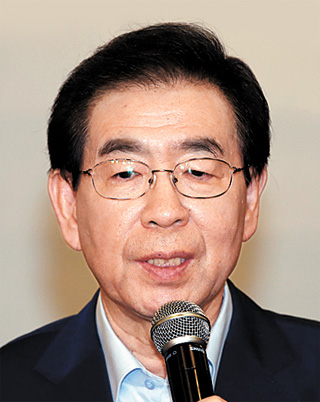 The Seoul mayor’s ballyhooed plan to live in a small rooftop house in the largely overlooked neighborhood of Samyang-dong in northern Seoul follows past attempts to raise the profile of underdeveloped areas by engaging with local residents there.

On Sunday, the Seoul Metropolitan Government announced that Mayor Park Won-soon will be living in a tiny two-room on the top of a building in Samyang-dong for one month starting this Sunday. It said the neighborhood was chosen because of its lacking infrastructure. Some alleyways are too narrow to even fit a fire truck.

“There is a height limit for buildings in Samyang-dong that prevents more active redevelopment here,” an official at the Gangbuk District Office said on the condition of anonymity. “The office will speak to the mayor about the specific need to develop the residential environment in this area.”

The Democratic mayor is known for his retail politics, and in his campaign for re-election last month, he specifically pointed to Gangbuk District, where Samyang-dong is located, as a focus for his third term.

“What is the point of coming up with policies from behind a desk?,” Park said on the stump last month. “I will run an on-site mayor’s office in Gangbuk District to solve issues that are closest to the heart of the locals.”

His home will be a 322-square-foot house on the roof of a two-story building. It will have two rooms and one bathroom. To get there, Park will have to walk up a narrow alleyway on a hill near Solsaem Station every day.

On Wednesday, some 10 workers were busy preparing for Park’s arrival. Some were moving furniture. Others were installing internet.

Park plans to sleep at the house every night and host meetings with locals there, a Seoul government official said. The rooftop outside the house will have a wooden table that can seat about a dozen people.

“I heard Park had the table set here because he wants to meet and talk to locals,” one worker said, “but I’m not sure if that will be feasible with the blazing sun.”

Some of the mayor’s neighbors-to-be can’t wait to welcome him.

“He wants to experience the life of an ordinary citizen here. How wonderful!,” said Kwon Kkeut-neum, 65, who will live across the street from Park. “You can tell the alleyways here need some work. I hope he will be able to solve some of our problems.”

“Democratic Rep. Park Yong-jin also lives in the area,” said Kim Jong-soo, 67, who has been living in Samyang-dong for 50 years. “Now with Mayor Park, we might definitely see some development here.”

The mayor’s detractors have panned the move as another dog and pony show.

“How much can he really understand of locals’ lives? It’s just a month,” read one post on Naver, Korea’s most popular portal site. “He has a perfectly well-functioning office in City Hall. Some of us see this move as sheer populism.”

“Some residents have been complaining because too many city officials are coming and going while trying to prepare his new place,” one resident said on the condition of anonymity.

Officials from the city government and Gangbuk District Office scouted five homes in the area. According to a Gangbuk District official, the owners said, “Even if the president wants to live here, we can’t offer the house for just a month at the average rental rate and without a deposit,” so the government settled on a high one-month rate without a deposit, the official said.

This is not the first time Park has decided to work outside City Hall. In November 2012, he stayed in an apartment in Eunpyeong District, northern Seoul, in an area that was under development but struggling to attract homeowners. He lived there for nine days.

By January the following year, most of the new apartments in the area were sold.