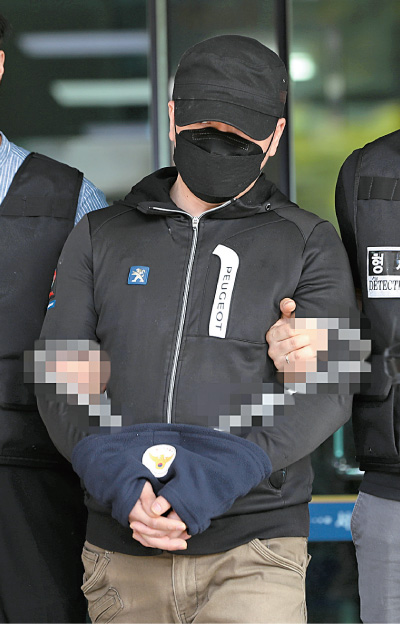 A 43-year-old man who allegedly took more than 20,000 videos of women over the course of four years by hiding cameras in motel rooms is handed over to the prosecution by the Suseo Police Precinct on Wednesday. [YONHAP]

Women’s groups are calling for strict punishment after police referred a man to the prosecution on Wednesday after he allegedly took more than 20,000 video clips of women at motels over the course of four years.

The Suseo Police Precinct said Wednesday that the suspect, 43, allegedly installed 17 spy cameras under TVs in three motels in Seocho District, southern Seoul, and collected the videos since 2014. Police arrested him on Tuesday.

The man said he installed the cameras while staying at the motel rooms and set them up to transfer the videos to his computer in real time, according to authorities. He reportedly confessed that he filmed the women to “satisfy his sexual desires” and claimed to have never leaked the video clips online. Police, however, said they found evidence that he did upload some video clips online, although they haven’t actually found the videos themselves. The suspect was transferred from the Suseo Police Precinct to the prosecution at around 7:30 a.m. Wednesday.

Online women’s communities are calling for speedy investigations and strict punishment in the case. Many compared it to the case of a woman who illegally took pictures of a nude male life model during a drawing class at Hongik University in May and posted them on the internet.

“The police should make the man stand in the photo line, like they did with the woman who committed the spy camera crime. Otherwise, the police have no right to claim that their investigation into the woman was not sexist,” one user posted. Another user posted that she hopes “the man is made to stand in a photo line and the press covers his case with the same emphasis that it covered the woman’s case.”

Many Korean feminist groups frequently protest what they see as the slow response of police to hidden camera cases with male perpetrators. They believe the police’s quick response to a case with a female perpetrator was an example of sexism.

When photos of the woman entering Seoul Western District Court made the press, online fury over the case boiled over. The anger over alleged police sexism led organizers to stage three feminist protests near Hyehwa Station in central Seoul, with the most recent on July 7. In response to online women’s groups’ complaints that the police forced the female suspect to stand in a photo line, police said they did not establish a line and that the woman was exposed while moving to another building for an investigation.

“The female perpetrator was promptly arrested for a one-time offense,” said Yun Ji-yeong, a professor at the Institute of Body & Culture at Konkuk University. “The man who was recently arrested is a repeat offender, so people are calling for a harsher penalty. Women who were infuriated by the police response to the case with a female perpetrator will keep a close eye on whether this man will only get a slap on the wrist.”