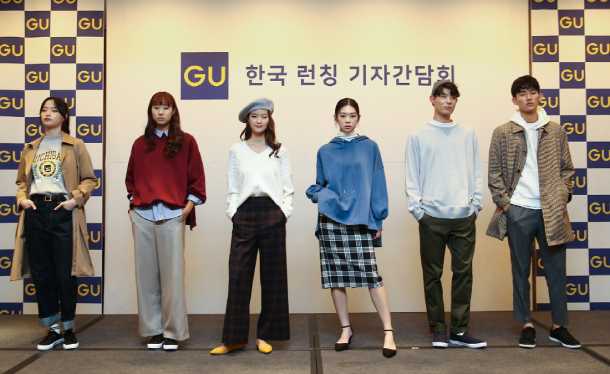 Uniqlo’s sister brand G.U. is coming to Korea in September and will open its first store in the Lotte World Mall in Jamsil, southern Seoul.

Due to open on Sept. 14, the store will be 1,400 square meters (15,069 square feet) on the first basement floor. The brand’s parent company is Japan’s Fast Retailing, best known for Uniqlo.

“Expanding overseas is one our most important tasks,” said G.U. CEO Osamu Yunoki in a press conference held Thursday in central Seoul. “Korea has consumers that are highly sensitive to fashion, so our launch here was considered essential to fulfill that goal.”

Korea is the fourth overseas location for G.U. It currently has 19 branches in China, Taiwan and Hong Kong, along with 374 in Japan.

G.U. was established in 2006 and has grown rapidly to reach 199.1 billion yen ($1.76 billion) in revenue this year. Its products are differentiated from Uniqlo by their lower prices and more diverse styles, which include preppy, feminine and business casual. Uniqlo emphasizes functionality and keeps its product designs basic.

“In Japan, Uniqlo and G.U. stores are often located close to each other and sales figures have shown that the two stores proximity create a positive effect,” Yunoki said. Uniqlo is on the first floor of the mall.

Yunoki said G.U.’s prices in Korea may be higher than in Japan considering additional costs like tax, but the plan is to maintain the similar price gap with Uniqlo as in Japan. In an interview with the Japanese media outlet Nikkei last month, Yunoki said the ideal pricing for G.U. was “half the prices offered by Uniqlo, or at least 30% cheaper.”

Some of the products at G.U.’s Korea branch will be exclusive to Korea. The brand has research centers in London and Tokyo that analyzes fashion trends in different markets.

“In line with the launch schedule, we did a study of Korean fashion based on interviews, postings on social media and fashion magazines, to come up with exclusive products like over-sized coats and skinny pants,” said Hirofumi Osako, G.U.’s regional head for Korea.

“Our plan is to learn from consumers here and continue to apply what we learn to products we release here.”

From August 24 to 26, a pop-up store will open in the Hongik University area to present G.U.’s fall and winter lineup. Local consumers can also see the designs beforehand through a mobile app that will launch August 1 and the official online shopping mall, which is due to open on Sept. 1.