Astronomer chases pie in the sky

Astronomer chases pie in the sky 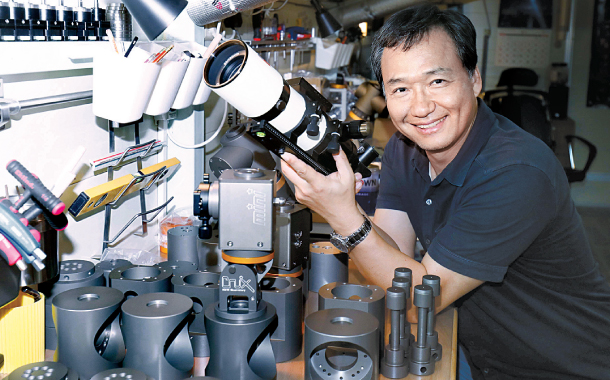 Hwang In-joon, the owner of Hobym Observatory, explains the principles and structure of his telescopes at his observatory in Asan, South Chungcheong. [KIM SUNG-TAE]

Every night, Hwang In-joon, 52, heads up to the roof of his observatory in Asan, South Chungcheong, to gaze at the stars. His prized possession is a telescope with a 40-centimeter (16-inch) lens.

Until recently, Hwang was running two pizza parlors. He had returned to his hometown of Asan in 2005 to pursue his passion of stargazing. Hwang ran the restaurants by day and wallowed away the nights in the observatory he built at the foot of a mountain.

Hwang’s love affair with astronomy dates back to his days in college. In 1984, he served as operations manager of the Korean Amateur Astronomical Association, and became the first Korean to photograph Halley’s Comet, which is only visible from Earth every 75 years, in 1986.

Early last year, Hwang decided to dedicate his whole life to stargazing. He sold his pizzerias to his store managers and registered a new business under the name of his observatory. Now, Hwang works full-time making equatorial mounts, an essential accessory that keeps telescopes focused on celestial objects. Equatorial mounts have two perpendicular axes, one which can be adjusted parallel to the axis of the Earth’s rotation, and another to compensate for the Earth’s movement.

Because he started the business alone, Hwang had to manage every aspect from designing the mounts to advertising them online. He studied computer-aided design on his own and learned how to make his own promotional website. He ordered parts from small manufacturers and assembled the mounts himself.

In 2017, Hwang sold 40 equatorial mounts and earned 160 million won ($142,070) in the process. About 70 percent of the sales were from exports to France, Hong Kong, Italy, Japan, the United Kingdom and United States. He expects sales to double or triple this year.

Hwang’s technical expertise and reputation have made his equatorial mounts popular with astronomers. In late 2016, he became the first person to commercialize and miniaturize equatorial mounts made with harmonic drive gears. These gears are prized for their speed and precision. They are even used in the Hubble Space Telescope. Because equatorial mounts determine the quality of astronomical observation and photography, astronomers pay attention to which electric motors or gears power the mounts before purchasing them.

Although Hwang is still an amateur, he is regarded as one of Korea’s best astronomy photographers and well-known overseas. Hwang previously served as director for the Korean Amateur Astronomical Society and published his own collection of astronomy photography in 2015.

“My hobby became my job as I began dedicating myself to something I enjoy,” Hwang said. “For now, I don’t intend to grow my business too big, but I can see myself doing this work until I’m 80.”