Walking with Us gives struggling kids a leg up

Walking with Us gives struggling kids a leg up 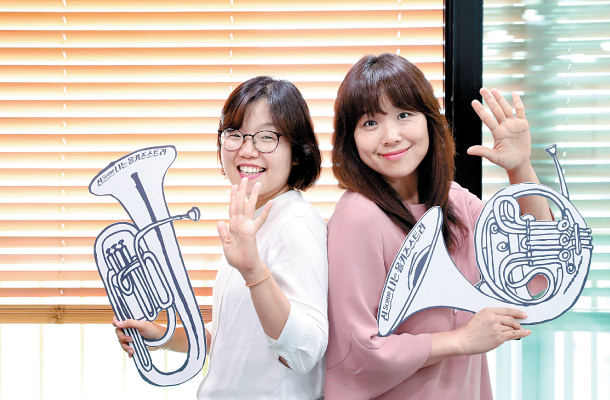 Yoo Won-son, left, executive director of Walking with Us, and Lee Hyun-jin, right, a manager at the organization, hold up paper versions of the instruments lent to students through the nonprofit’s Allkidstra program. [WOO SANG-JO]

Two years ago, Yu-mi was an underachieving first grader. Even after completing her first year of elementary school, she was unable to read Korean properly and couldn’t add or subtract.

But Yu-mi’s life in the classroom took a turn for the better after she met a teacher from the Allkidstudy program at a community center.

Allkidstudy is run by Walking with Us, a nonprofit that offers cultural, educational and welfare programs to underprivileged children who struggle at school because of their socioeconomic background.

“We provide resources for children, no matter the situation or condition, so they can reach their potential,” said Yoo Won-son, executive director of Walking with Us. She has a been dedicated employee of the organization for eight years.

It has been a year and six months since Yu-mi was first introduced to the program. She can now easily read Korean, add and subtract two-digit numbers, and even tell time. By the end of second grade, her scores rose to 92 percent in Korean and math. Two years ago, she was getting zeros in math.

“In first grade, teachers rarely called my name, but now, they compliment me a lot,” Yu-mi said. “I also made more friends!”

Walking with Us runs five programs: Allkidstudy, where underachieving students receive one-on-one tutoring three times a week; Allkidstra, a youth orchestra made up of marginalized children; Jamong, which means dreaming on one’s own in Korean, a program that funds projects to help young adults gain social, emotional and economic independence; Exit Bus, shelters for homeless teenagers; and Allkidsgift, an instrument-lending campaign.

“At first, the system was catered toward guiding middle schoolers,” said Lee Hyun-jin, a manager at Walking with Us. “We contacted professionals who had experience teaching in hagwon [cram schools] but the kids’ tests scores didn’t go up. We realized we had to help these children at an earlier age. For the first time in two years, we changed the structure of the program and started giving one-on-one lessons to second graders.”

The Allkidstra program, which currently has 10 woodwind orchestras, is changing children’s lives. It lends instruments such as clarinets, flutes and tubas to children of marginalized groups and sponsors their lessons, concerts and music camps. Seven of the 3,000 children who participated in the program so far have gone onto college as wind instrument majors.

The annual budget for Walking with Us is $2 million. About 70 percent of that money comes from donations from 350 private sponsors.

“It is rewarding to see kids change through these various programs,” Yoo said. “I hope there will soon be other companies that strive to help children grow in a healthy way and that our society will transform into an environment that gives fair chances to everyone.”