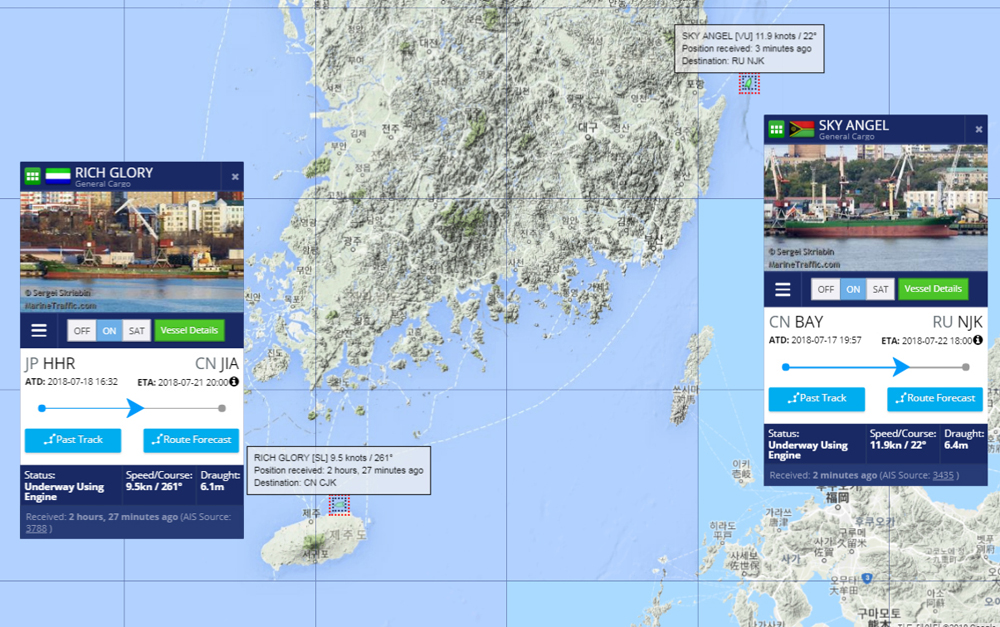 Two ships suspected of carrying North Korean coal in the guise of Russian exports, in defiance of international sanctions, appeared again off the coast of South Korea on Friday, Marine Traffic data showed.

The Sky Angel, under the flag of Vanuatu, sailed off the eastern coast of the Korean Peninsula in the early afternoon en route to Nakhodka, a port city in Russia’s Far East, according to data from Marine Traffic. The Rich Glory was headed toward Jiangyin in eastern China’s Jiangsu Province from Jeju Island.

Earlier, the Munhwa Ilbo reported that the Sky Angel was sailing about 10 kilometers (6 miles) off the coast of Ulsan. The vessel is one of two ships cited by a UN report as carrying North Korean coal to South Korean ports. The other vessel, the Rich Glory, appeared about 80 kilometers off the northeastern coast of Jeju Island.

South Korean authorities have been facing backlash for regularly failing to properly detain vessels suspected of carrying North Korean coal into South Korean ports. Resolution 2397, adopted by the UN Security Council last December, allows countries to seize, inspect and impound ships at ports if there is “reasonable grounds to believe” they are involved in the transport of items prohibited by sanctions, including coal through ship-to-ship transfers.

Earlier this week, Seoul officials confirmed that the same two ships, under the flags of Panama and Sierra Leone, carried over 9,000 tons of North Korean coal from the port of Kholmsk on Russia’s Sakhalin Island to South Korean ports last October, a violation of a comprehensive coal ban passed by the UN Security Council in August 2017.

South Korean customs officials initially released the ships because they appeared to follow declaration and registration procedures, though the vessels have visited the country’s ports numerous times in the past few months.

The Rich Glory docked at Incheon and was inspected on Feb. 2 this year, according to shipping inspection data from the Memorandum of Understanding on Port State Control in the Asia-Pacific Region, or Tokyo MOU. Similarly, the Sky Angel entered Gunsan in South Korea on Feb. 21, though most of the inspection took place in Vladivostok, Russia.

Neither vessel was seized by South Korean authorities. More recently, they went through inspections at Japanese ports without a hitch.

In a statement on Friday, the South Korean Ministry of Foreign Affairs expressed “regret” over the various reports that it had done nothing to detain the vessels suspected of illegally transferring North Korean coal, reiterating that there had been “no violation of any Security Council resolutions.”

On the reports that the government had overlooked those vessels entering Korean waters 24 times, the ministry reiterated that it has been “investigating the importer” since last October after it became aware of the vessels entering Korean ports. Before entering the South’s ports, the Sky Angel and Rich Glory “had followed proper customs clearance procedures,” the ministry said.

The ministry also rejected that it had violated sanctions by not detaining the two vessels.

“In October 2010, Resolution No. 2397 enabling the detainment of vessels on reasonable grounds of violation of resolutions was absent,” it said, adding that in the case of interment, “all circumstances, including the transfer of embargoed goods, needs to be taken into consideration.”

It added that there had been “no transshipment of North Korean coal in South Korea,” referring to ship-to-ship transfers which have been seen as a method used by the North to disguise the origins of its goods and evade sanctions.

The Korean government, it said, is “closely cooperating with the United States and the [UN Security Council] Sanctions Committee to faithfully implement Security Council resolutions.”

The ministry previously announced on Wednesday that it has taken measures to detain three ships that entered South Korean ports in violation of sanctions: the Lighthouse Winmore and the Koti, for their involvement in ship-to-ship transfers to North Korea-flagged vessels, and the Talent Ace, involved in the transport of coal originating from North Korea.

“Under the UN Security Council Resolution, detainment of a vessel is allowed when there is reasonable evidence, and related Korean authorities are investigating this issue,” Noh Kyu-duk, a spokesman for the ministry, said on Thursday. “Along with the investigation, appropriate measures will be reviewed.” He stressed that this is an opportunity to “realize the significance” of UN Security Council sanctions.

He also explained why the Sky Angel and Rich Glory were not detained like the other three vessels currently under South Korean authorities.

“There was considerable direct evidence in the case of the vessels that were detained,” Noh said, “for example, how supplies from North Korea were directly transferred. However, there is an investigation currently underway to obtain such reasonable evidence,” in the case of the two vessels suspected of carrying North Korean coal via Russia.

Opposition parties lampooned the government for its lack of action on the vessels suspected of importing North Korean coal and demanded transparency.

“What are the Foreign Ministry and Blue House trying to hide?” Kwon Sung-joo, a spokesman for the minor opposition Bareunmirae Party, said on Friday. “There are two things that have to be made clear. First, why are the related vessels continuing to be neglected when there is reasonable evidence provided by the UN Security Council report, and second, where were the 9,000 tons of North Korean coal that entered last October going?”

The U.S. State Department said it would veto any reduction of the UN Security Council’s imposed ban on North Korea’s exports, the Voice of America reported on Thursday, and that it would take action against those who facilitate North Korea’s evasion of international sanctions, following the reports of coal shipments from Russia to a third country.