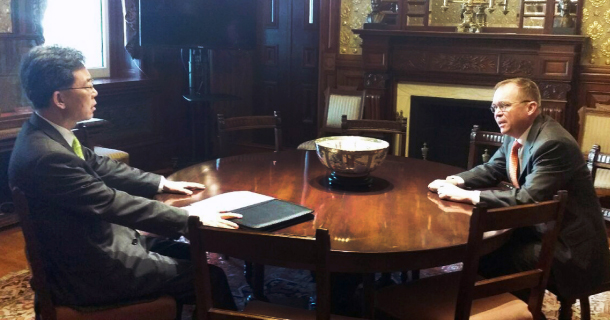 Government officials and representatives from the local auto industry rushed to the United States last week to request that Korea be exempted from higher tariffs on imported cars.

The Korean delegation, headed by Trade Minister Kim Hyun-chong, met with officials from the White House, Congress and think tanks during their U.S. trip from Wednesday to Friday, arguing that imported cars from Korea should be excluded from the tariff renewal based on Section 232 of the Trade Expansion Act.

“Kim explained that the revised Korea-U.S. FTA already reflects the concerns that the U.S. has about its automobile industry and security,” said an official from the Ministry of Trade, Industry and Energy on Sunday.

In March, Korea agreed to extend a 25 percent tariff on Korean pickup trucks in the U.S. to 2041, instead of 2021, ensuring the unfavorable export conditions for Korea’s pickup truck manufacturers continues.

“He also emphasized the fact that Korea and the United States impose zero tariffs on cars imported from each other’s country based on mutual benefits,” the official added.

According to the ministry, the U.S. officials agreed with the Korean delegation and showed concern that the new tariffs might have a negative effect on America’s labor market and the economy considering the industry’s complex global supply chain.

Hyundai Motor President Chung met with lawmakers based in Georgia and Alabama, two states where the automaker runs assembly lines. Korea International Trade Association Vice Chairman Han Jin-hyun mostly met with officials from the U.S. government and think tanks such as the Center for Trade and Economics and the Center for Strategic and International Studies.

“Finance Minister Kim Dong-yeon explained to his U.S. counterpart that the two countries have been carrying out fair trade with the renewed Korea-U.S. FTA until now, and expressed his strong opposition to imposing higher tariffs on imported cars from Korea,” the Finance Ministry said in a release. “Kim also emphasized the positive effect that Korea’s auto industry has had in the U.S., such as hefty investment and employment,” the release added.

Trade Minister Kim will continue to lobby U.S. officials. He will visit the United States from July 25 to July 27.