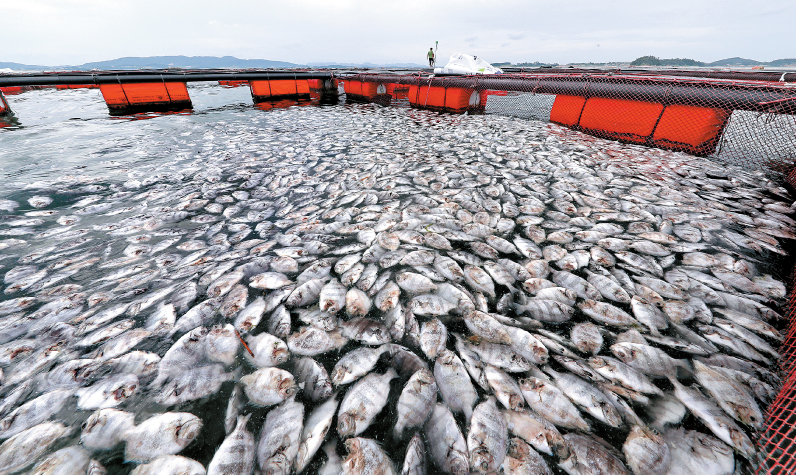 Some 80,000 rock bream fish perished at fish farms in Hampyeong County, South Jeolla on Sunday. Water temperatures in the region rose as high as 32 degrees Celsius (89.6 Fahrenheit) over the past 10 days. [YONHAP]

With Seoul’s high temperature hitting 38 degrees Celsius (100 degrees Fahrenheit) on Sunday, the nation’s heat wave was unwavering over the weekend, resulting in the deaths of both people and livestock.

A 21-year-old man was found unconscious in a car in Hongseong County, South Chungcheong, on Saturday. He was found lying unconscious in the backseat of a car at around 12:20 p.m. He died soon after he was transported to a local hospital.

“I forgot to lock my car overnight,” the owner told police. “The next day I found a stranger in my car, so I called the police.”

The 21-year-old man had autism, according to his relatives. Police said the man is suspected to have suffocated to death in the car after having, for unknown reasons, entered the unlocked car and failing to get out.

Some deaths over the weekend resulted from water-related accidents.

Also on Saturday, an 84-year-old woman was found dead in a river in Sancheong County, South Gyeongsang, and an 80-year-old man fainted at a beach in Busan and was transported to a hospital, but died soon after.

Heat wave warnings have been issued throughout the country over the past few days.

The Korea Meteorological Administration (KMA) issued heat wave advisories in Daejeon and Sejong on Thursday, and the national weather agency upgraded the advisories to heat wave warnings on Sunday.

It also issued heat wave advisories and warnings in North Chungcheong regions on July 11, which still have not been lifted as of Sunday. The temperature spiked to 36.6 degrees Celsius in Boeun County, the highest the county has seen in July since 1994.

Seoul’s Sunday high of 38 degrees Celsius was nearly the hottest temperature ever recorded in the city during the month of July. In 1994, one of Korea’s hottest summers on record, Seoul hit 38.4 degrees Celsius.

Livestock is also suffering under the persistent heat. Some 80,000 rock bream fish died at fish farms in Hampyeong County, South Jeolla, over the past week, according to the South Jeolla provincial government on Sunday.

The provincial government did not rule out the possibility that the fish died of diseases and requested inspection by the National Forensic Service.

Throughout the country, some 1.1 million livestock died due to high temperatures, according to the Ministry of Agriculture, Food and Rural Affairs.

The KMA said the heat wave is expected to persist until the end of the month and that it will likely get more humid in the coming week as typhoon Ampil passes through the sea north of Taiwan over the weekend and pushes hot and humid air towards the Peninsula.

BY SHIN JIN-HO, CHOI KYUNG-HO AND WE SUNG-WOOK [chung.juhee@joongang.co.kr]