YOON SUNG-MIN
The author is a political news reporter of the JoongAng lbo. 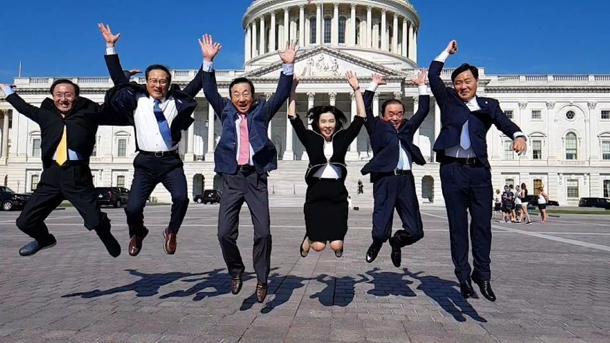 Floor leaders of the ruling and opposition parties pose on Capitol Hill on July 19. [YONHAP]

“The first, second and third goals are cooperation,” said incoming speaker of the National Assembly Moon Hee-sang in his inauguration speech on July 13. Cooperation is the keyword in the second half of the legislature. The Blue House hoping to pass reformist legislation, the ruling party wishing for the success of the Moon Jae-in administration and the opposition party dreaming of rebuilding the conservative front all advocate cooperation. The nation has high hopes for speaker Moon, who said the government and the ruling party are all responsible for legislation for reform and the economy. “I won’t just blame the opposition parties,” he said.

Five floor leaders of the ruling and opposition parties accompanied him on his U.S. visit from July 18 to 22. They met with the U.S. Congress and administration officials to persuade the U.S. Department of Commerce not to apply expanded tariffs on Korean cars and discussed the denuclearization of the Korean Peninsula with Stephen Mull, undersecretary of state for political affairs.

Upon returning on July 22, the Bareunmirae Party’s Rep. Kim Kwan-young said it was meaningful for the floor leaders to engage in bipartisan diplomatic efforts.

However, people cannot help feeling some déjà vu. Cooperation and unity has always been emphasized whenever a National Assembly session opens. Before the 20th National Assembly began in April 2016, the then-ruling Saenuri Party’s spokesman Kim Myung-yeon said, “We’ll work to make people’s lives richer with the politics of cooperation.”

But as soon as the assembly opened, confrontation over the revision of the National Assembly Act began. DP spokesman Ki Dong-min said he was sorry that the 20th National Assembly session began with political strife. When President Moon’s constitutional amendment was submitted to the legislature in March, there were voices within the DP asking whether the cooperation was really about unity.

On top of all the failures, the National Assembly once again promised to work together. The citizens know they are ready to attack one another as soon as their interests change. The politicians must prove their intent with substantial outcomes.