‘We need to scrap voting rights of labor and management’

‘We need to scrap voting rights of labor and management’ 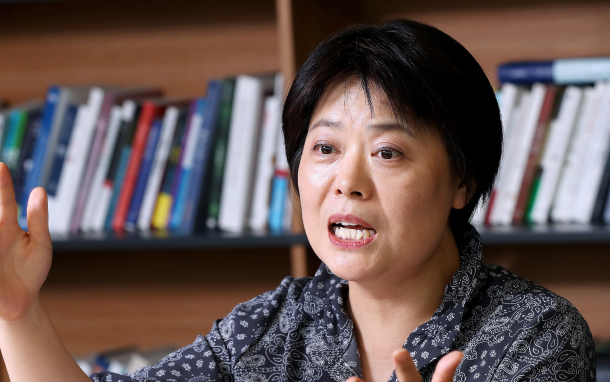 Yoon Hee-sook, Professor of social policies at the KDI School of Public Policy and Management

The whole country is confused about next year’s minimum wage. Smaller business owners, who mostly earn low incomes, have said that they refuse to accept the increase to 8,350 won ($7.42) that the Minimum Wage Commission has set. They say they can’t pay workers much and vowed not to surrender, even if they become criminals. They dub their refusal “a protest for the sake of survival.” This is the first time in 30 years that they will disobey the decision reached by the Minimum Wage Commission.

The Korea Employers Federation and the Korea Federation of SMEs, both business lobbying groups, decided to ask the Minister of Employment and Labor to review the minimum wage decision.

The phenomenon leads to the question of what went wrong with the recent negotiations over next year’s minimum wage. The JoongAng Ilbo recently sat down with Yoon Hee-sook, a professor of social policies at the Korea Development Institute (KDI) School of Public Policy and Management, to talk about the issue.

“It was wrong that the right to decide [on the minimum wage] was given to those who do not intend to view the minimum wage from a policy perspective,” she said. “That led them to make a political decision, as if they were negotiating on wages.”

Yoon previously served as the head of finance and welfare policy research at the KDI, focusing on income and welfare issues such as the minimum wage and pension. She became a public interest commissioner at the Minimum Wage Commission in April 2016, but stepped down after participating in the negotiating process for the next year.

“I was hoping experts would have an in-depth discussion, but they would never listen to opposing parties, and only concentrated on fighting in factions against each other,” she said.

Q. What does a “political decision” mean when it comes to the commission’s decision on the minimum wage?

A. Adjusting the minimum wage is about policies. The commission should come up with clear numbers that serve as a basis for the raise and has to consider what impact the wage hike will have on people affected by the decision. But what is happening with the worker councilors who represent the Federation of Korean Trade Unions and the Korean Confederation of Trade Unions? They simply came up with a groundless increase and bragged about their transparency. That way, they gain support from members of their organizations and solidify their political standing. Small business owners that are already in trouble are dealt a blow in the mean time.

How does having employer and public interest commissioners affect the Minimum Wage Commission?

The person who represents the employer commissioners is the chairman of the Korea Employers Federation. I got a strong impression that the chairman is following the commands of the government.

When I was a public interest commissioner in 2016, someone leaked a rumor that there would be a 7 percent hike, even before the negotiations began. I thought it was groundless. But the federation proposed a 7 percent rise at the last minute, even though it insisted on a freeze before.

Why is the federation influenced by the government?

It has a lot of issues tangled with the government. Since the federation has large companies as members, they won’t be hit particularly hard, even if wages are increased. It has no reason to stand up to the government.

Why is the minimum wage necessary?

The government considers the minimum wage to be a tool for income-led growth. What do you think of the theory that when salaries go up, people will spend more, which will revitalize the economy and lead to economic growth?

I don’t think there are many economists who agree with this theory. Basically, innovation is supposed to lead growth, and growth will propel salaries.

Are you saying the minimum wage is not necessary?

Not really. Conflict has worsened amid the increased wage gap from global competition. It is necessary to ease the conflict by narrowing the gap, but a drastic raise will deprive low-income laborers of jobs and hurt small businesses. Balance is needed.

Korea has raised the minimum wage by a combined 29 percent over past two years. Isn’t that a rather excessive increase?

Let’s not think about the past, but look at the plan to raise the wage by 10.9 percent next year. If the country is seeking balance, it should be able to explain why such a number was chosen.

Is it appropriate to make what is decided by the Minimum Wage Commission, an independent body, into a presidential campaign pledge?
Even if the administration talked about the minimum wage during the heated campaign period, its impact and side effects should have been considered when actually deciding it. But nothing was done.

How could their stance be reflected in the minimum wage policy?

It is impossible under the current structure. The Minimum Wage Commission members attacked each other and barely came to a conclusion even after staying up all night. They don’t represent all workers either. The two umbrella unions represent only 10 percent of all laborers nationwide, and the majority of the workers they represent are regular workers.

There has never been such high tension and conflict over the minimum wage before. Do we have to change the regulations?

The British model has the best reputation. It designates nine commission members to reflect on the opinions of management and workers. No representatives from the labor and management side participate in the final decision on minimum wage. If Korea wants to maintain the commission’s structure as it is now, it needs to scrap the voting rights of labor and management.