Poet files a lawsuit against accusers: Writer Choi Young-mi says she is ready to take on Ko Un in legal battle

Poet files a lawsuit against accusers: Writer Choi Young-mi says she is ready to take on Ko Un in legal battle 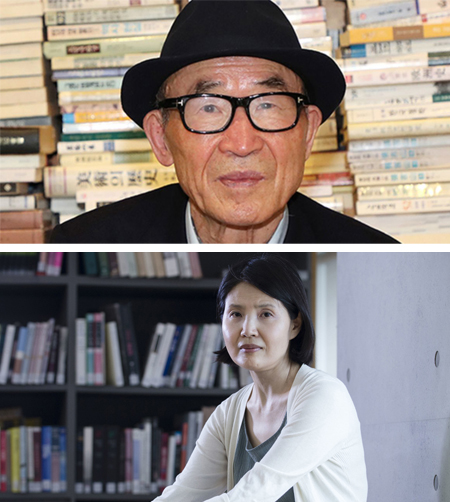 Poet Ko Un, Top, filed a suit against poet Choi Young-mi and others for accusing him of sexual harassment. Ko is asking for nearly 1.07 billion won worth of compensation in damages. [JOONGANG ILBO]

Poet Ko Un filed a suit for 1.07 billion won ($955,564) worth of damages at the Seoul Central District Court on July 17 against experts in the literary community for accusing him of sexual harassment, according to local media reports.

In statements posted on Facebook, poets Choi Young-mi and Park Jin-seong confirmed that they are being sued by Ko, along with a local media company.

Choi was the first to make public allegation against Ko. She appeared on JTBC’s nightly news program “Newsroom” on February 6 and revealed that Ko had habitually abused others sexually and she had witnessed his improper actions many times in the early 1990s. She added that the issues of sexual assault were prevalent in the literary community at the time and also said that if female writers said no to any sexual requests from well-known male writers, the women would fail to get writing jobs.

Before she explicitly called out Ko, she had published a poem titled “Goemul,” which can be translated to “Monster.” In the poem, she describes how some literary experts sexually abuse new writers, and implies that the attacker is Ko. The poem was published in the winter edition of a literary magazine last year.

Park Jin-seong wrote a post on Facebook in March implying that he had seen Ko pull his pants down and shake his genitals at a younger woman in 2008.

After the news about Ko filing the suit broke on Wednesday, Choi made a post on her Facebook page saying that she was notified by the court about the suit.

“Now a difficult fight has started, I need to eat first,” said Choi. “It is the first time for me to be sued and the name of a well-known law firm is listed as the counsel for the plaintiff Ko.”

Ko, in an attempt to rebut the allegations made by Choi and others, released a statement through his U.K. publisher Bloodaxe Books in March.

“I regret that my name has been brought up in the recent allegations,” he said, according to an article published in The Guardian on March 2. “I have already expressed regret for any unintended pain that my behavior may have caused.

“However, I flatly deny charges of habitual misconduct that some individuals have brought up against me. In Korea, I would simply wait for the passage of time to bring the truth to light and settle the controversy.”

With allegations against Ko arising early this year, the Seoul Metropolitan Government scrapped its plan to dedicate a corner of a library next to City Hall to Ko. The corner, which was decorated with illustrations from Ko’s “Maninbo,” also known as “Ten Thousand Lives,” was originally set up to commemorate the 100th anniversary of the March 1st Movement against Japanese colonial rule.

Meanwhile, Choi was honored by the Seoul Metropolitan Government with the Gender Equality Award, an annual award the city government gives to those who work to strengthen women’s rights, social participation and gender equality. Choi was chosen for speaking up about the sexual inequality and social contradictions faced by women in the literary scene.