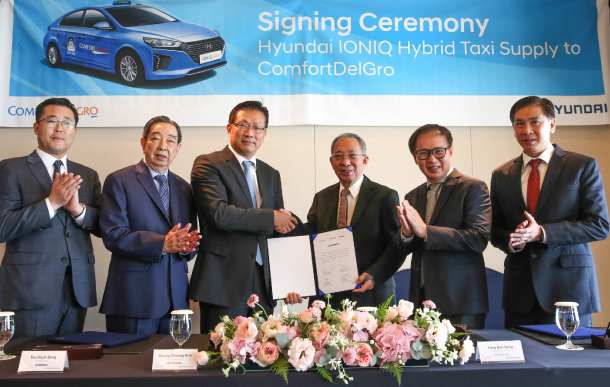 Hyundai Motor is setting out to tackle the global taxi market with its eco-friendly models.

Korea’s largest automaker announced Thursday that it inked a deal to sell up to 1,200 Ioniq Hybrids to Singapore’s leading taxi operator, ComfortDelGro, by the first half of next year.

While Hyundai has been supplying cars like the Sonata sedan and i40 hatchback to the company since 2007, this is the first time Hyundai is selling a hybrid model to ComfortDelGro.

As the Singaporean government tightened emissions regulations on cars in January, Hyundai said it expects the eco-friendly taxi market in the country to grow.

Hyundai’s Ioniq Hybrid has a fuel efficiency rating of 58 miles per gallon from the U.S. Environmental Protection Agency, one of the best rankings in the U.S. market.

The automaker will deliver 500 Ioniq Hybrids to Singapore within this year and supply up to 500 more by the first half of next year. Another 200 will be delivered based on an earlier deal signed in April.

“Considering that Singapore is Asia’s financial and retail business hub and a country visited by roughly 15 million tourists annually, Hyundai will be able to expand its presence in the global eco-friendly taxi market by supplying Ioniq taxis to the country,” a Hyundai Motor spokesperson said.

The carmaker’s partnership with ComfortDelGro could also develop into more business opportunities for Hyundai.

The transportation company, founded in 1970, owns roughly 59 percent of the taxis operating in Singapore and has taxi business overseas, including in China, the United Kingdom and Vietnam.

ComfortDelGro has been making efforts to work together with ride-hailing companies like Uber.

In January this year, Uber and the taxi company launched UberFlash, a service that matches customers with taxi drivers or Uber drivers based on proximity.

Hyundai invested in Grab, now Singapore’s dominant ride-hailing app, in January, and said it hopes to strengthen business cooperation with the country’s transportation companies based on the partnership.