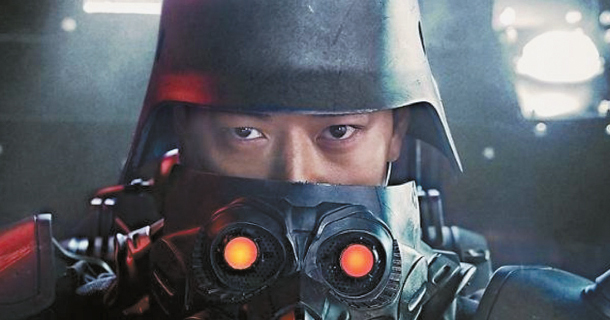 For fans of Japanese animation, the 1999 film “Jin-Roh” is a monumental work. Directed by Hiroyuki Kimura and written by Mamoru Oshii, who directed the famous “Ghost in the Shell” (1995), “Jin-Roh” was met with critical acclaim both in and out of Japan, and still stands today as a seminal sci-fi movie.

More than two decades later, acclaimed director Kim Jee-woon of the award-winning “The Age of Shadows” (2016) has remade the animated hit into the live action flick, “Illang: The Wolf Brigade.”

The Korean adaptation relocates the setting from post-World War II Japan to South Korea in 2029, a period after the two Koreas have declared a five-year preparation for unification. In fear of the rapid growth in Korea following the planned unification, the world superpowers impose economic sanctions against the country. 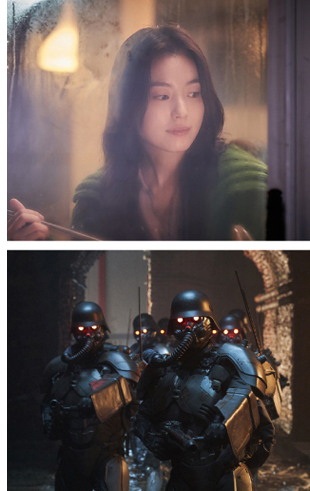 The economic difficulties lead to public outrage and result in the emergence of an armed terrorist group named Sect, which opposes the formation of a joint government between South and North Korea. In response, the government launches a special police unit to quell Sect.

Feeling threatened by the growing influence of the special police unit, the national intelligence agency plots to bring the unit down.

At the center of the two forces’ battle are Im Joong-gyeong (Gang Dong-won), a highly trained member of the police unit, and Han Sang-woo (Kim Moo-yul), a former special police officer who now works for the national intelligence agency.

After a high school girl from Sect blows herself up right in front of Joong-gyeong’s eyes, Sang-woo intentionally sets Joong-gyeong up with a woman named Lee Yun-hee (Han Hyo-joo), who Sang-woo claims to be the dead girl’s older sister.

Following the encounter, Joong-gyeong and Yun-hee gradually develop feelings for each other as they both desperately crave an escape from their dire realities. This leaves Joong-gyeong, who has been trained to fight like an emotionless beast, or Illang, torn between his mission to be a beast and his unquenchable warm feelings toward Yun-hee.

Despite the film’s action-packed scenes and star-studded cast, which also includes Jung Woo-sung, Han Ye-ri and singer-turned-actor Min-ho from pop group SHINee, critics’ reviews have not been so positive.

“Kim’s recent movies, including ‘Illang,’ have become a lot heavier in genre, and they lack the sense of vitality that used to be present in his movies like ‘The Good, The Bad, The Weird’ (2008) and ‘The Foul King’ (2000),” said film critic Kim Hyung-seok. “The plot is pretty simple, but the way the story unfolds is very unfriendly. There are many obstructive scenes in between that prevent audiences from fully immersing into the film.”

Director Kim Jee-woon, center, and the cast of “Illang: The Wolf Brigade” at a press event held in central Seoul last week ahead of the film’s release on Wednesday. [YONHAP]

Kim went on to describe the romance between Joong-gyeong and Yun-hee as lacking an emotional touch. “Characters and their motivations, why they act in certain ways and why they feel so desperate to avoid the situation, are not properly explained. I don’t think director Kim Jee-woon is a great fit for genre-heavy films with complex plots.”

“Illang” is a sci-fi film filled with classic elements of the spy and thriller genres. But the movie doesn’t execute either very well, according to film critic Park Hye-eun.

“In the remake, [the director] chose to put a bigger emphasis on romance and action, which in turn weakened the spy and thriller elements.”

Park added, “[Director Kim] managed to bring the original’s visual elements like the red-beamed eyes and iron armor to the live movie, but [could not convince audiences] why the film had to be remade.”

These criticisms were not unforeseen.

“The original is highly praised by fans,” said Kim Jee-woon during a press conference held in central Seoul last week. “There have been many cases in which live adaptations of acclaimed Japanese animations flopped, and that fear also existed inside me.”

Despite the director’s concerns, the original screenwriter is satisfied with how the Korean adaptation turned out. Oshii visited Seoul for a screening and complimented the movie.

“I think this is a powerful movie that provokes lots of thought ... The balance between the realistic locations and the futuristic technologies like iron armor and diverse guns was very impressive,” said the screenwriter.

Released on Wednesday, the movie sold a little more than 270,000 tickets on its first day amid harsh reviews from audiences.