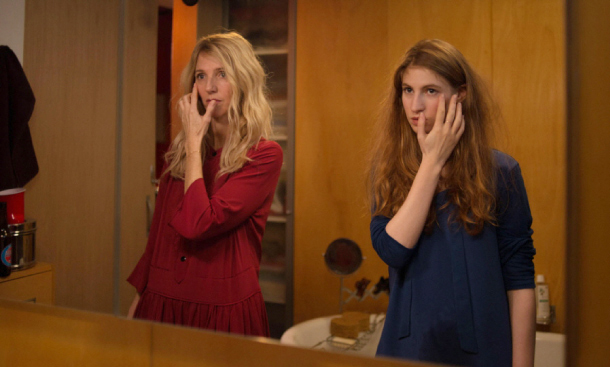 “When Margaux Meets Margaux” is a subtle French psychodrama that delicately deals with the life crises people at different ages encounter, through the eyes of the same person at different stages of her life. [BUCHEON INTERNATIONAL FANTASTIC FILM FESTIVAL]

French writer-director Sophie Fillieres’ latest directing and writing effort, “When Margaux Meets Margaux” is a subtle comedy drama that delicately unravels the psychological states of two women, who happen to be the same person at different stages in her life.

Despite Fillieres’ intriguing imagination that delves into the female psyche, the movie gradually loses its momentum, and abruptly wraps in a way that feels too convenient.

The eccentric film, which screened at the 22nd Bucheon International Fantastic Film Festival, which wrapped up on Sunday, revolves around a twenty-something Margaux and her twenty-years-older self.

Each has different concerns in life. While the younger Margaux feels nervous about her uncertain future, the older Margaux is concerned about her fading youth and becoming middle-aged.

The film unfolds as the two meet at a party one night in Paris. Without a clear explanation, they both sense a strange connection and are taken aback by the similarities they share.

The encounter creeps the younger Margaux out while the older Margaux feels quite amused and hopeful about the possibility of being able to guide her younger self towards a different future by advising her to avoid the choices that she still regrets having made.

Through the influence they impose on one another, the self-destructive and confused younger Margaux gets a peek of how she wants to live her life while the older Margaux learns to accept where she is.

Alongside the two is Marc, the older Margaux’s ex-boyfriend, who also sleeps with the younger Margaux.

Though he neither understands the entire situation or the relationships between the two women, he at times functions as a mediator between the two, and provides a strange sense of comfort to both of the struggling women.