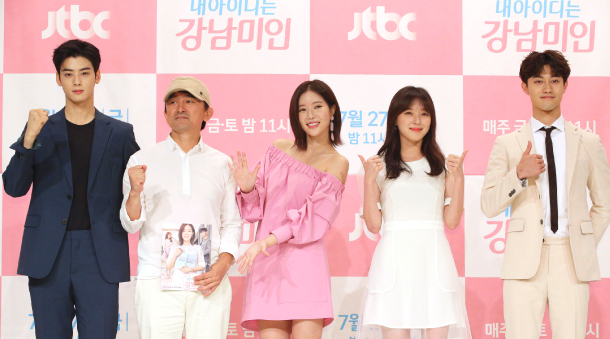 From left: Actor Cha Eun-woo, director Choi Sung-bum and actors Lim Soo-hyang, Jo Woo-ri and Kwak Dong-yeon, at a press conference on Thursday in Seoul Times Square, located in Yeongdeungpo District, western Seoul, for the JTBC drama, “My ID is Gangnam Beauty,” which is based on a web comic of the same name. [JTBC]

We’re constantly told that happiness comes when we accept who we are, but how do people do so when they do not love themselves? This is the question that drives the newly released drama, “My ID is Gangnam Beauty,” which aired its first episode Friday night on JTBC.

Based off of a Naver web comic of the same name by writer Keemaengkee, the story revolves around college freshman Mi-rae, who decides to undergo a major transformation before starting university after learning that Korea is not a forgiving place for someone whose face does not fit in to the common ideals of beauty. The title comes from Korean slang “Gangnam miin” meaning Gangnam beauty, referring to a particular bunch of young women who end up looking similar due to having multiple plastic surgeries. In both the web comic and the drama, Mi-rae is constantly referred to as a Gangnam beauty, and reminded that her beauty is artificial.

Directed by Choi Sung-bum, the drama is the chance to see the web comic’s message about lookism, conveyed through the plot that points out the day-to-day ordeals that people deemed less attractive must go through. Korea is notorious for its high percentage of people who have had plastic surgery, with 11.8 percent of the population saying that they underwent a procedure in 2017 according to Statistics Korea.

“I really liked the message that the web comic was trying to tell,” said Choi at a press conference on Thursday prior to the drama’s premiere. “It’s not [just] about showing the life of the main character experiencing a [180 degree] change in her life due to plastic surgery, but about portraying the hardships that one has to encounter after going through plastic surgery due to social prejudice.”

As tough as it is for someone to cope with trivial prejudices about their appearance, the story shows how it’s equally as difficult for people who try to escape that reality through surgery, after being called names like “Gangnam Beauty.”

“There are people out there like Mi-rae who are suffering from the same pain,” said Choi. “The purpose of making the web comic into a drama was to present this [very pain] without making it seem too exaggerated.”

Along with presenting the hardships that Mi-rae (Lim Soo-hyang) goes through, the coming-of-age drama also depicts how Mi-rae matures through interacting with characters, including her love interest Do Gyeong-seok (Cha Eun-woo), her rival Hyeon Su-a (Jo Woo-ri), her senior classmate Yeon U-yeong (Kwak Dong-yeon) and her best friend Oh Hyeon-jeong (Min Do-hee).

A scene in the drama, left, is inspired by the original webtoon “My ID is Gangnam Beauty,” in which the two main characters, Mi-rae, left, and Gyeong-seok, right, work together in the university laboratory. The two are both freshmen majoring in chemistry. [JTBC, SCREENCAPTURE]

“Even though the drama is a romantic comedy, there is still a message,” said Lim. “[As an actor,] I tried to focus heavily on how Mi-rae grows up.”

Although the drama follows the main story of the web comic, it is slightly different in terms of plot.

“Because the drama consists of 16 episodes, it was necessary for us to make the story richer,” said Choi. “We did this by adding a new character, Hyeon-jeong, and creating a side story about the university students majoring in chemistry. Since it was difficult to show [viewers] Mi-rae’s inner-thoughts, we created Hyeon-jeong so that Mi-rae could express her feelings out loud by conversing with her.”

Another distinct element of the drama is the portrayal of Mi-rae’s personality. “In the web comic, Mi-rae just copes with the [rude] things [other people say], but in the drama she stands up for herself,” said Lim.

When asked about whether it was burdensome to play her role, Lim said, “It did feel slightly peculiar, but I didn’t really feel pressured to play this kind of a character. I have played a killer and a North Korean defector before. After all, the character is only part of the [story’s] set-up.”

“This drama tells a story about the inner self, and how [the heroine] discovers true beauty,” added Cha.

The drama will run at 11 p.m. on Friday and Saturday, and Naver has released the web comic for free, with a new episode released every day.