Jin says Asiad will be his last

Jin says Asiad will be his last 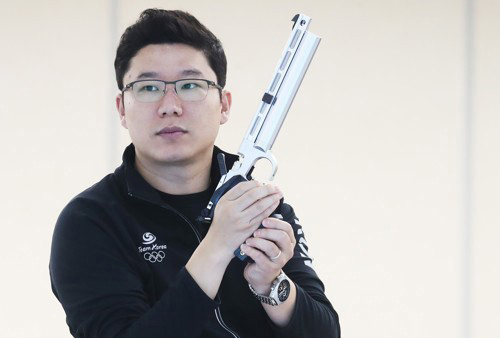 The 38-year-old, one of the most decorated Olympians for Korea, said it was a conscious decision on his part to keep telling himself that this year’s Asiad, scheduled from Aug. 18 to Sept. 2 in Jakarta and Palembang, Indonesia, will be his final one.

“Otherwise, I don’t think I would have been pushing myself as hard,” Jin said at a press conference in Seoul. “I figured I’d be trying to do my absolute best if I thought this would be my last Asian Games.”

As much as shooting is a mental sport, Jin said he has also begun to feel physically drained.

“I feel like the sport is taking a physical toll on me,” Jin said. “I’ve lost a bit of my mental edge, but I know I have to overcome all this with extra focus at the Asian Games.”

If anyone could get away with feeling sluggish or lethargic — with admitting to doing so — it is Jin. He has won virtually every title that a shooter can win, including four Olympic gold medals. Three of those came in the 50-meter pistol at three consecutive Olympics starting in 2008, making him the first Korean to win three straight Olympic titles in one event.

In the four previous Asian Games, Jin won three gold, four silver and four bronze medals, though he has yet to win a gold in an individual event.

That Jin doesn’t have an individual Asian Games gold is one of the great mysteries in Korean sports, and Jin said he has been frequently reminded of his personal drought in the lead-up to this year’s Asian Games.

“To me, all gold medals are the same whether they’re from individual or team events,” Jin said. “So many people keep telling me I don’t have an individual gold from the Asian Games. I’ll try to win one this year.”