The Olympic ambitions of Kim Seo-yeong

The Olympic ambitions of Kim Seo-yeong 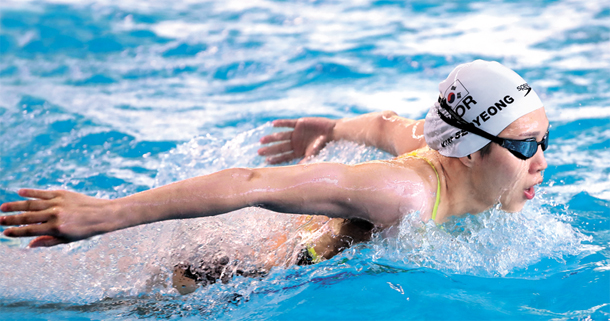 Kim Seo-yeong, who hopes to win Korea’s first Olympic medal in women’s swimming, warms up with a butterfly stroke at the MBC National Swimming Competition in Gimcheon, North Gyeongsang, on July 19. [KIM KYUNG-BIN]

Kim Seo-yeong, the 24-year-old all-rounder, might be the future of Korean swimming.

This year, she set a national record in the 200-meter individual medley, which combines butterfly, backstroke, breaststroke and freestyle in an intense challenge even for professional swimmers. Kim finished the national team tryouts in April with a time of 2:08.61, the fastest in the world this year.

Now, Kim is throwing down the gauntlet, shooting for gold at the 2020 Tokyo Olympics. She wants to be the next Park Tae-hwan, who won Korea’s first Olympic medals in swimming with a silver in 200-meter men’s freestyle and gold in 400-meter men’s freestyle at the 2008 Beijing Olympics. Team Korea is hopeful that Kim will become the first female Korean swimmer to win gold.

At her most recent event, the MBC National Swimming Competition in Gimcheon, North Gyeongsang, on July 19, she competed in the 100-meter backstroke but was unexpectedly disqualified for being underwater for longer than 15 meters (50 feet). Kim, ever good-natured, laughed it off. “It happened because I was going too fast while underwater,” she said. “It’s a good experience to have before the Asian Games.”

The young swimmer is confident that way. At just 52 kilograms (115 pounds) and 163 centimeters (5 feet 4 inches), she is small compared to many of her rivals. “I did have moments of weakness when I thought I was too small and weak,” she said, “but then I saw a Japanese swimmer become the world champion and thought to myself, ‘If a Japanese person can do it, why can’t I?’”

Kim left for Japan on Wednesday to train in Osaka before competing in the Asian Games next month. “I was so envious of the women’s curling team for bringing joy to the country,” she said, referring to Korea’s unexpected silver in women’s curling at the most recent Winter Olympics. “I want to reach a milestone in Korean women’s swimming as well.”

The individual medley event values versatility over a large build. It demands smooth transitions, heavy concentration and perseverance. Kim’s competitive instincts are an asset. “It’s not like I have superior cardiopulmonary functions,” she said, “but I’ve been competitive for as long as I can remember. Even when I started swimming at age 4, I didn’t want to lose to any of the 5-year-olds in my class.”

Kim was selected to compete for Korea in her final year of middle school, but she struggled for a long time because of a shoulder injury and some slumps. She regained her confidence after competing in the 2016 Rio Olympics.

“Seo-yeong suffered shoulder injuries because she was so flexible that her joints were colliding against one another,” said Ahn Mu-jin, Kim’s fitness trainer. “She is at her most ideal form after doing less mobility training and focusing more on building muscle.”

Although her next big competitions are the Asian Games and the 2019 World Aquatics Championships in Gwangju, Kim’s real focus is winning gold in Tokyo 2020. The grandmaster of her plan is the North Gyeongsang Sports Council, credited with nurturing the women’s curling team that stole the show in PyeongChang 2018.

“Seo-yeong was not an ace,” Kim In-gyun, the head coach, recalled about the time the council recruited Kim in 2013, “but we saw her great attitude. She knows how to enjoy the fruits of her hard labor.”