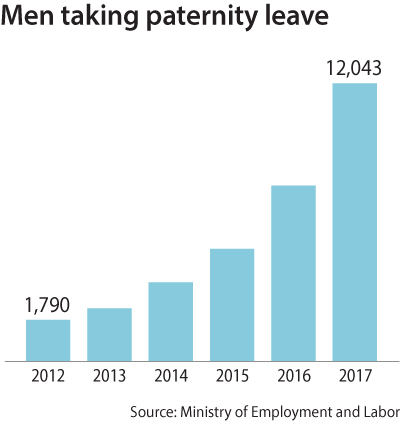 The number of men taking paternity leave is shooting up at unprecedented speed as the government and employers increase benefits for fathers in hopes of increasing Korea’s plummeting birthrate.

Although workplace pressure often prevents men from taking paternity leave, companies and the government are attempting to change work regulations and culture to encourage fathers to take time off from work and spend it with their families. They hope that it will allow male workers and their spouses to have more children.

Lotte Group became the first Korean conglomerate to make paternity leave mandatory for male employees of all its affiliates in January 2017. According to Lotte, over 2,000 employees took paternity leave as of the end of June.

Lotte’s paternity leave system mandates that men take least one month off when their children are born. Employees receive 100 percent of their wages for one month of their leave.

In a survey conducted by the company, 91 out of 100 wives of male employees who took paternity leave said that they were positive about the idea of having a second or third child, and the same portion also said that the leave helped them care for their children.

“We introduced the mandatory leave system based on Lotte Group Chairman Shin Dong-bin’s belief that paternity leave will help boost the birth rate,” said Ki Won-gyu, the director of Lotte’s human resources development team. “There were some initial concerns about productivity loss, but we concluded that there were more pros than cons, including [helping workers] find balance between work and family life.”

Even in companies that don’t mandate paternity leave, more and more workers are taking time off to help raise their children. The Ministry of Employment and Labor found that 8,463 male employees of private companies took paternity leave during the first half of this year, a 64.9 percent increase from the same period last year.

The spike in paternity leave is attributed to lessened financial strain due to increased leave pay and the widespread awareness of work-life balance. Last September, the government raised the parental leave pay from 40 percent of normal wages to 80 percent, and increased the cap monthly payments from 1 million won to 1.5 million won ($893 to $1339) per month for the first three months of their leave.

The number of workers who received parental leave bonuses from the government was 3,093, up 50.7 percent from 2,052 last year. Under the bonus system, when both parents take parental leave for the same child, the second parent to take time off can receive 100 percent of their salary, up to 2 million won, for the first three months of their leave.

“We will continue to expand the parental leave support system, and we want to keep campaigning for better awareness of work and family life balance,” said Kim Deok-ho, the director general of the Youth and Women’s Employment Policy Bureau at the Ministry of Employment and Labor.

However, 58.4 percent all workers who took paternity leave worked at companies with more than 300 employees. Because small and mid-sized companies experience more strain from employees’ absences, workers at large corporations are more likely to take paternity leave.