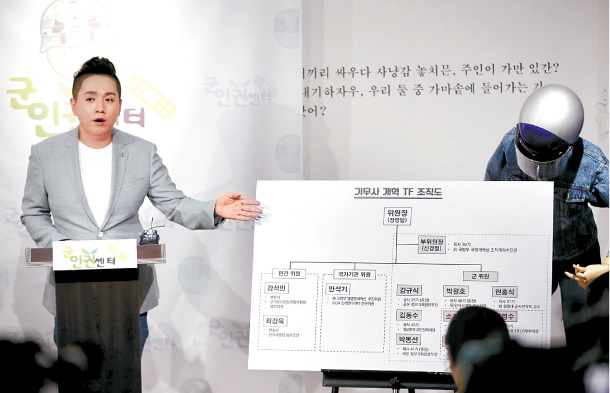 Lim Tae-hoon, head of the Center for Military Human Rights Korea, explains the group’s findings about the Defense Security Command’s surveillance activities at a news conference in Seoul on Monday. [YONHAP]

The military’s intelligence unit eavesdropped on phone conversations between a former president and his defense minister, a civic group said on Monday.

Citing tips from insiders, the Center for Military Human Rights Korea said the Defense Security Command tapped the military phone line used by President Roh Moo-hyun, who served from 2003 to 2008, and his defense minister, Yoon Kwang-ung, who served from 2004 to 2006.

“This means that the Defense Security Command, which should have been controlled by the president and defense minister, was instead surveilling them,” the center said.

Roh allegedly talked with the minister about affairs related to current President Moon Jae-in, who was serving as Roh’s secretary for civil affairs at the time.

It is not known why the intelligence unit intercepted the conversation or who might be behind the surveillance.

“It is hard to gauge how extensively the Defense Security Command engaged in its wiretapping,” the center said.

The announcement came weeks after another revelation that the Defense Security Command had devised a detailed plan to declare martial law last year in case the Constitutional Court ruled against then-President Park Geun-hye’s impeachment. Moon recently ordered an independent probe of the unit.

The unit allegedly collected the personal information that civilians provided to guardhouses when they visited military facilities.

The information included their home addresses and criminal records, the center said.