Seoul’s flea markets have something for everyone : Senior citizens and young people alike descend on Cheonggyecheon in the center of the city to buy anything from clothing to old magazines

Seoul’s flea markets have something for everyone : Senior citizens and young people alike descend on Cheonggyecheon in the center of the city to buy anything from clothing to old magazines 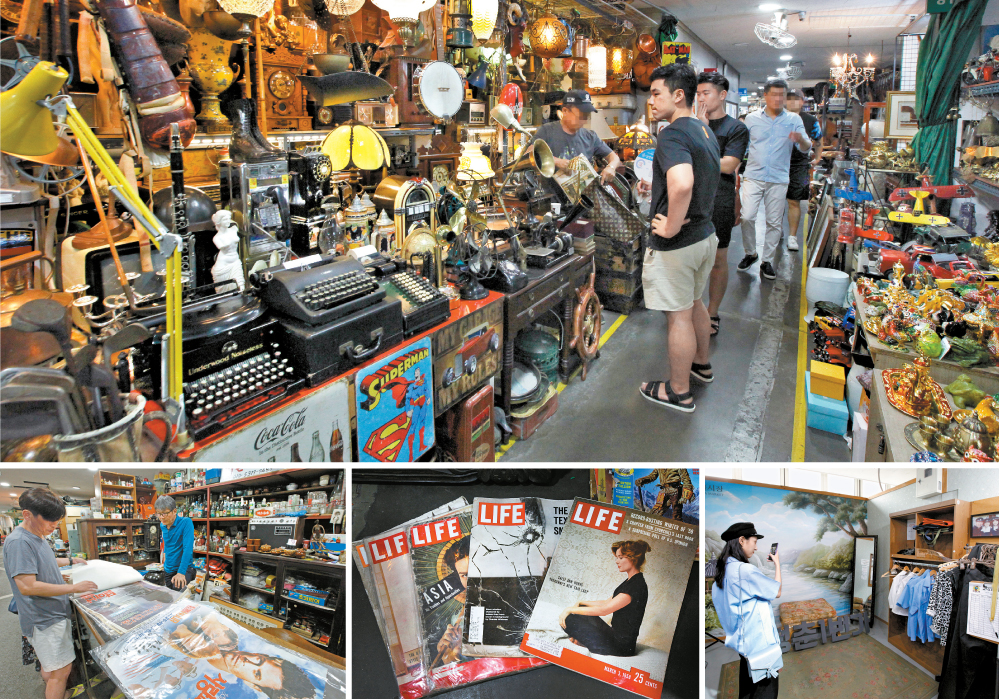 Above: Interior designers from Busan wait for a merchant to pack five old issues of Life magazines they purchased for 150,000 won at the Seoul Folk Flea Market in central Seoul on Thursday. From Left: A visitor looks at old posters at the Seoul Folk Flea Market; Five magazines purchased by the designers above; young visitors try on old school uniforms at Youth 1st Street on the second floor of the market. [PARK SANG-MOON]

On any given day, the small stores that make up the Seoul Folk Flea Market located near Sinseol-dong Station in central Seoul are overflowing with what, at first glance, looks like a lot of junk. One store in the corner of the market’s first floor is selling, among other things, a rusty church bell, cassette players and a lone adult-sized ski.

Who’s going to buy all that?

“My husband does,” said Kang Seung-nam, 71, who followed her husband on a recent Saturday to “keep an eye on him.” Beside Kang, her husband Hwang Kyu-ho, 79, was handing a 5,000 won ($4.50) note from his fat wallet to the shopkeeper for a single odd ski.

“I’m going to paint this ski and turn it into a plant hanger,” said Hwang. “I usually don’t carry cash but I made sure my wallet is thick today because I eyed some things yesterday.”

For 74-year-old Hwang, visiting flea markets in central Seoul and finding “treasures among piles of stuff” has been a hobby for more than a decade.

Although Kang disagrees with her husband’s concept of “treasures,” she allows him to purchase a few inexpensive items “since it keeps him happy and quiet.”

There are many elderly people like Hwang who have made the Seoul Folk Flea Market their new playground.

“I still enjoy going to open-air flea markets in Dongmyo,” said Hwang, “But for old people like myself, it can be tiring. It’s too cold during the winter and too hot during the summer.”

Because most of the stores at the Seoul Folk Flea Market are the same as they were decades ago, and continue to sell similar things, senior citizens and regulars usually make up the crowd of customers rummaging through typewriters, magazines published in the 1980s, as well as old household goods from brands that do not exist anymore.

The Seoul Folk Flea Market was relocated to its current venue in April 2008, but its history dates back to many decades ago, when the merchants were street vendors at the edges of Cheonggyecheon, a stream in central Seoul.

Back in 2004, the flea market, which was at the time known as Hwanghak-dong Market, was forced to move to the old soccer field in Dongdaemun Stadium, where the Dongdaemun Design Plaza now stands, in order to clear out the newly-refurbished Cheonggyecheon area. The move was not easy, with riots and collisions erupting between stall keepers and the police. But, after seeing customers flowing into the stadium, the merchants settled down in the stadium under a new name - Pungmul Flea Market.

But in 2008, with the new city development plan to locate the Dongdaemun Design Plaza in the area, the merchants had to vacate the venue once again. To compensate them for the trouble, the Seoul Metropolitan Government spent 10.3 billion won to build the current Seoul Folk Flea Market near Sinseol-dong Station. 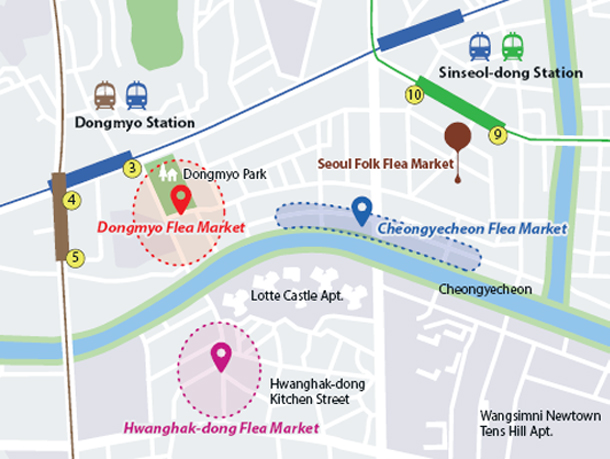 It’s been 10 years since the relocation and both merchants and visitors seem to be satisfied with having a roof over their heads.

According to Lee Byung-jin, an official at the Seoul Metropolitan Government who manages traditional markets in Seoul, there are 815 stores currently operating inside the market.

“About 94 percent of the market is currently occupied,” said Lee. “To provide more support for traditional market vendors, we rent out a section at a relatively cheap price, which is around 50,000 won to 60,000 won per month depending on the location.”

It’s not only senior citizens like Hwang who frequent the Seoul Folk Flea Market.

Two men in their 30s were bargaining the price of five old Life magazines at one store. They said they were interior designers from Busan who frequently visit the market to purchase props whenever they get a new project to open a new cafe.

“Oh fine,” said the merchant, “but come visit my store again next time.”

“It’s not that easy to find these old issues from the 80s,” said Kang. “We are going to rip them out and plaster them on a wall.”

Kang said they prefer to travel up to Seoul and buy all the materials they need here as everything they need is under one roof.

To attract more young visitors, the market’s management office together with the merchants’ association created Youth 1st Street on the second floor of the market. Young visitors can try on old school uniforms that their parents or grandparents probably wore, and take pictures, or enjoy a drink at a vintage-looking cafe known as a dabang, or coffeehouse, that was popular back in the day. There are also vintage shops selling school bags and notebooks, which according to the management office, attracts many young visitors.

“I see more young people these days than before,” said the merchant who sold five Life magazines to the interior designers. He preferred not to be identified. “I’ve been selling antiques for nearly 30 years and, yes, I did move from the Cheonggyecheon to the soccer stadium to here.”

He said he likes being indoors as many of his customers, both young and old, visit him for his rare items. But for other vendors, the number of visitors has decreased compared to when they were set up outside.

“Honestly, there are some vendors here who would rather close their shop here and go out and set up street stalls during the weekend as there are more visitors to open-air markets,” he added. 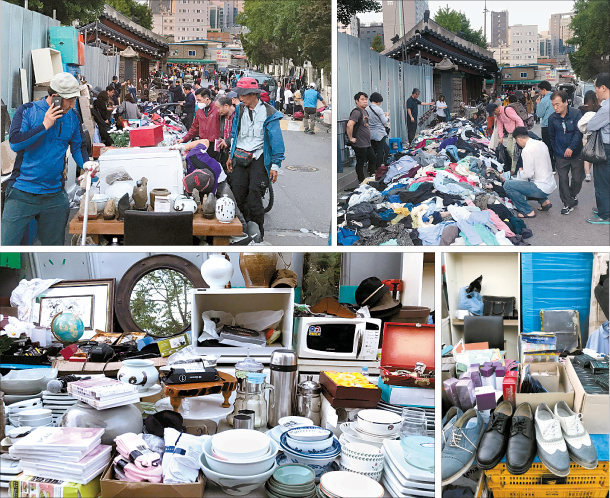 Ironically, despite the Seoul Metropolitan Government’s efforts to clean out the Cheonggyecheon area, street vendors again began to occupy the edges of the stream on the weekends.

“We’ve been receiving a lot of complaints from residents” said Lee from the Seoul Metropolitan Government. “As you know, when the Cheonggyecheon was refurbished, it became illegal for street vendors to operate there but it’s really difficult to root them out.”

Lee said it is the Dongdaemun District Office’s responsibility to crack down on them.

Meanwhile, vendors in the Dongmyo Flea Market near Dongmyo Station and the Hwanghak-dong Flea Market, located across the stream from the Dongmyo market seem happy, despite the scorching heat, that they’ve decided to stay outdoors.

Dongmyo Flea Market is known to have existed since the Joseon Dynasty (1392-1910), but it has looked the way it does now since the 1980s. According to merchants there, the market became larger in the early 2000s, when many vendors near the stream decided not to go to the soccer stadium and instead join their market.

The area used to be a gathering place for Seoul’s senior citizens, where they ate and purchased things at affordable prices, but became a hot spot for younger Koreans after it was featured on the reality program “Infinite Challenge” in 2013, when K-pop icon G-Dragon went shopping for vintage clothes there.

“It’s not easy to find a fashionable outfit here,” said a 21-year-old college student Moon Hak-min, who was browsing through piles of clothing at Dongmyo Market on a recent weekend. “After a few hours, I find one or two things that I really like and I can get them for about 5,000 won. It’s fun to shop like that. But, I’ve seen a lot of younger visitors and the prices are definitely going up.”

The nearby Hwanghak-dong Flea Market, also an open-air street market, recently has also seen a sharp increase in visitors after it was featured in the reality program “My Ugly Duckling” last month, making it the envy of indoor merchants at the Seoul Folk Flea Market.

“A SBS drama recently shot several scenes here,” said one merchant in the Seoul Folk Flea Market. “Maybe that would help to attract visitors here. I don’t know… But I guess the attraction of a market is the fact that it’s outdoors.”

Lee Kwan-seok, 42, visits both the street flea markets and the Seoul Folk Flea Market “nearly every weekend,” and that they each have “pros and cons.”

“It’s difficult, even for me, to walk around in the heat and in the crowd, especially in Dongmyo where more and more merchants are targeting young customers,” he added.