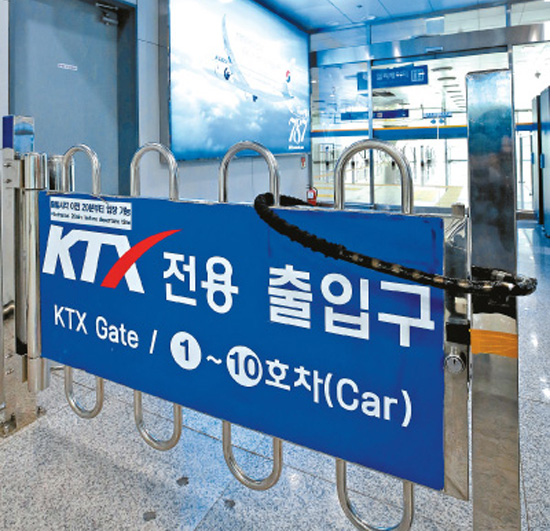 The entrance to the KTX platform at Incheon International Airport is locked on Tuesday. Korea Railroad Corporation and the Ministry of Land, Infrastructure and Transport decided to officially end the KTX service that connects the airport to Seoul Station. [YONHAP]

The Korea Railroad Corporation, or Korail, is ending its Korea Express Train (KTX) service from Incheon International Airport to Seoul Station on Sept. 1.

The Ministry of Land, Infrastructure and Transport on Monday approved a request submitted in June by the country’s express train operator.

Korail is ending the service because so few people used it.

“The company decided to modify the KTX route in order to remedy the inefficiency caused by simultaneously operating the KTX and the Arex [Airport Railroad Express Train],” said an official from the national railroad company.

In fact, the KTX airport service has been suspended since the end of the 2018 PyeongChang Winter Games for maintenance.

The number of people using the service was high when it first began in 2014 but has fallen tremendously, according to Korail. More people are taking the Arex, which travels the same 63-kilometer (39 miles) route more frequently. The Arex is also cheaper than the KTX and takes the same 40 to 45 minutes.

KTX trains traveling between the airport and Seoul Station have been over 70 percent empty for the past couple of years, according to Korail. Last year, an average of about 3,000 passengers took the trains per day.

But more than 200,000 passengers have been taking the Arex daily in recent years and the number of trips Arex trains make has been limited to 350 a day because it shares tracks on some parts of the route with KTX trains. If the KTX stops using those tracks, Arex trains could make more than 400 trips per day.

Seoul residents are unlikely to miss the KTX service, but its ending may cause inconvenience for travelers living outside of Seoul, especially in the southern parts of the country. KTX trains from Incheon Airport traveled to other parts of the country after a brief stop at Seoul Station, directly connecting major cities in the south such as Busan, Gwangju and Daegu.

Korail promised that airport limousine buses between the airport and Gwangmyeong Station in Gyeonggi, a KTX hub.

The Transport Ministry, Korail and the Airport Railroad Corporation, the operator of the Arex service, will discuss how to increase the number of Arex trains on the route.

The decision is already causing headaches for organizers of the Fina World Championship scheduled for July 25 to Aug. 10 in 2019 in Gwangju, South Jeolla, during which 15,000 athletes and officials from some 200 countries are expected to visit the city along with visitors. In 2017, about 500,000 people visited Budapest, Hungary, for the championship.

The city government and the organizing committee are reportedly considering mobilizing as many as some 250 buses during the competition.

The government operated direct KTX trains from Incheon to Pyeongchang County in Gangwon during the Winter Olympics earlier this year.